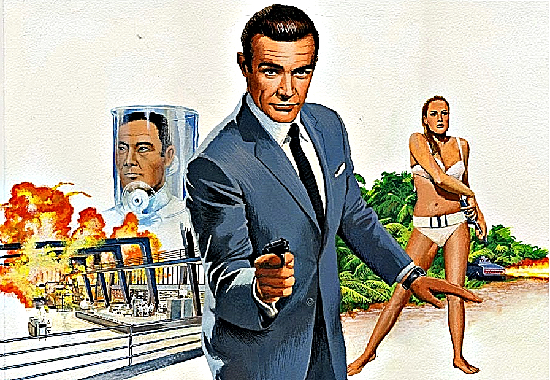 I am reluctant to name anything “the best” because that appellation is usually very subjective. It’s easier to name something as “my favorite” because… how can you argue that? You may say that I have no taste but my favorite something is my favorite.

James Bond has existed in the movies for over fifty years and as a character in books even longer. A large number of actors have played the part onscreen and all of them (yes, even Roger Moore) have had good films. Some turkeys in there, too.

For many people, James Bond is Sean Connery. I can fully understand that – he was the first to depict 007 onscreen and many of the traits he introduced became defining tropes. I would argue, however, that some of the excesses that crept into the franchise also started during the Connery years. The over the top villains, the elaborate sets by Ken Adams, the women as sex objects and so on. They became set in stone and the Bond films became fossilized and outdated even as they were made.

When Daniel Craig became the new Bond in 2006, the entire series was revamped. The whole approach to Bond changed. The franchise was very much influenced by the Jason Bourne movies. Bond was more realistic and so were his opponents. Skyfall stripped Bond down; at one point, he is out of shape, seedy looking, and not in command of himself or the situations he finds himself in. He’s aging and the film admits that; Bond has to work to become the Bond he was once again, if he can.

It’s so hard to compare. While certain tropes remain the same, there are so many differences that it’s as if there are two different characters named James Bond. Sean Connery’s Bond is very much a man of his time – late 50s to mid 60s – while Daniel Craig’s Bond is very much of today. In From Russia With Love, Bond is perhaps closest to the Ian Fleming novels’ version of the character. That’s not always a good thing; the books, in addition to being highly chauvinistic, could be terribly racist. It can make you cringe.

Goldfinger, without a doubt, is the most entertaining of the three films but, for me, Skyfall is better written and has the best director in Sam Mendes (an Academy Award winner for American Beauty). It’s full of grace notes and visual flourishes, such as the scenes in Shanghai. Some shots are just stunningly beautiful.

To be honest, while I love Goldfinger, for me the choice for the best Bond film comes down to From Russia With Love and Skyfall. The Bonds depicted, though, are so different! In the end, I give the edge to Skyfall as the best Bond film. It suits my sensibilities. And, yes, for me the best 007 is Daniel Craig. Heresy to some, I know, but there it is. That’s also a very tight race.

The favoritism of Craig’s Bond may increase with the release of the newest Bond film, Spectre, in November. The current series has dug deeper into who the character is and this promises to further that exploration. After fifty years, they’re still finding something new to do with James Bond.