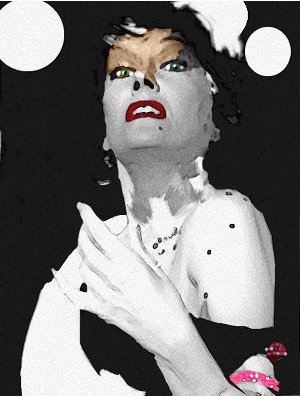 You are an actress. You’re an actor. You’re a singer, a dancer, model, novelist, journalist cartoonist, illustrator, photographer, or designer.

You are an artist.

You’re not just any run in the mill artist. You are a badass mofo, the absolute real deal. You’re a phenomenal talent and everyone knows it. Your family and friends, producers and editors, creative and stage directors, publishers and choreographers, marvel at your talent.

You know it’s going to be a hard climb. It’s hard to make it as an artist, any kind of artist. That’s not really a concern because you have the goods. Your Academy Award is assured. Amazon won’t be able to keep up with orders on your first novel. Your single will break iTunes.

Your peers are jealous. They talk about you, spread rumors, and take any opportunity to dismiss your genius. Some who’ve been in the game longer than you, offer council. Before you know it, your circle is full of like-minded people who have your best interest at heart.

It’s certainly hard to get your foot in the door, but you do it. Before you know it, you score an assignment from Marvel. It’s just a fill-in, but its real. It’s all down hill from there. The first day of shooting you have a little run in with the director. No biggie, he needed to understand your point of view and now he does.

It’s obvious the massive amount of notes given were guidelines, not direction. They sought you out for your voice and this is your novel after all.

What is the problem with your boyfriend? He knows the head of Sony. What’s the big deal? Why can’t he simply introduce you? You’re what they are so looking for. Is your girlfriend crazy? She thinks a mention and a plug of your latest article by a well-known editor is a good thing. You know that “mention” and “plug” is all bullshit an attempt to screw you over.

Man, are you tired of people not listening to you when it’s obvious you know what you are talking about. You didn’t need to meet any music producer the day you encountered a nice looking guy who brought you drinks and said he was a movie director.

Your boyfriend can hook that music producer meeting up any day.

So what if it’s the second time you’ve done that. He’ll get over it. You didn’t flake nor did you lie, you simply changed your mind.

Man, is that bitch crazy or what? You can certainly do a boys weekend in Vegas and meet your deadline Tuesday. It’s a 22-page story you have three, almost three pages done and all day and night Monday to do it.

It doesn’t matter if your friend gets a movie; it has nothing to do with you.

Oh, yes it does. You’re much more talented than she is.

You don’t ask a powerful publicist to pitch you especially if she doesn’t represent you.

She reps your girlfriend and it will only take her two seconds. What’s the big deal?

Seeking funding for your production? There’s a procedure you have to follow.

Why? Why can’t they just give you the money?

Just because something’s done a certain way doesn’t mean it can’t be done another way. Don’t you dare listen to him when he say’s you’re not ready for primetime.

You have all the talent in the world, you really do. He’s an idiot when he said that talent, without professionalism, doesn’t mean shit in this business.

He’s full of himself, and his ‘everybody’ example was just ignorant.

Everybody was the best actor, writer, or singer back at Whatever Happened To High School. In entertainment, you need people around that will tell you the truth, not hangers-on who have not done a thing for your career but keep promising they will. “They won’t and you know why? They can’t. They can’t do a motherfucking thing; they have no connections, no power, and no scruples. Posers all.

Just because someone is super-successful and gets paid handsomely for advice they give you for free, does not mean you have to listen.

You keep doing things the way you do things. Don’t listen to anyone’s advice You know better. You are better.

You’re a star and one day all your years and years of shortcuts will pay off!