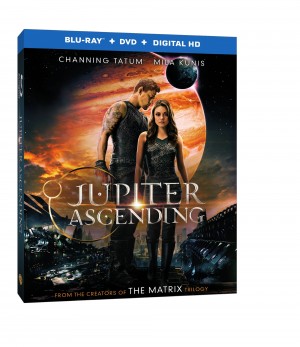 Many cultures initially believed you could not own the land, just use it. Then other cultures thought otherwise and ownership became the norm. Now imagine discovering that some intergalactic race owns the Earth and all its inhabitants. Pretty cool idea, no?

The Wachowskis don’t do much with this in the film Jupiter Ascending, a pretty misfire that has plenty of ideas and plenty of plot holes turning it into more of a mess than a state-of-the-art science fiction tale. It’s a shame really; these are the creators who blew our minds nearly twenty years ago with a little something called The Matrix.

The film, out this week from Warner Home Entertainment, starts on Earth and tells the story of the oddly-named Jupiter Jones (Mila Kunis). She and her family her emigrated from Russia to America where they have a family-run housecleaning business. It’s not much of a career for a young woman and she hates it but she endures scrubbing toilets to raise the funds to buy a telescope to gaze at the stars as she once did with her father Maximillian Jones (James D’Arcy). Short of cash and desiring this treat, she was prepared to sell her eggs to complete her fundraising.

A funny thing happened during the harvesting process: aliens come looking for her. Before they can do away with her, for reasons as yet unknown, she is rescued by Caine Wise (Channing Tatum), yet another alien and Jupiter’s life will never be the same. 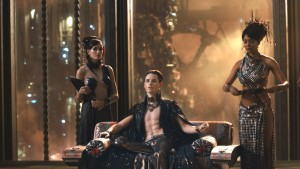 Through Caine and then Stinger Apini (Sean Bean), Jupiter begins to learn that she is somehow the reincarnation of House Abrasax’s matriarch, who was murdered some 90 millennia earlier. We’re told about Keepers and Entitled and those who strike their better lose their wings, and on and on. It all boils down to the climax of a long game being played by Kalique Abrasax (Tuppence Middleton), Titus (Douglas Booth) and emperor Balem (Eddie Redmayne). If Jupiter is killed then one of them can inherit the Earth or maybe marry one of the others and then kill her so the groom can inherit the Earth. Why? Apparently, we’re a hardy bunch and we’re a rich supply of the life essence that keeps these royals immortal. Truly.

The goal is to keep Jupiter from claiming her birthright but first she has to be convinced this is all real and then she has to go to the realm and deal with interstellar bureaucracy to establish her claim is legit. 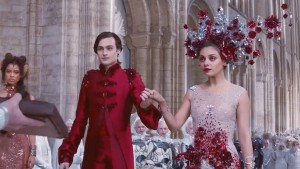 There’s running, jumping, fighting, double-crossing, last-minute rescues, verbal byplay, true love, and every other stock element you want in your sci-fi popcorn films. What’s missing though is the gravitas that this is real and the stakes are high. Jupiter accepts this all with barely any wide-eyed wonder and is then all gung-ho to get involved. Things take a decidedly nasty turn when the emperor has kidnapped her family, including momma Aleksa (Maria Doyle Kennedy). She will surrender the Earth or watch her loved ones be killed.

There’s then more running and things blowing up and the world coming apart and somehow a series of nick of time rescues that stagger the imagination followed by two incredibly unbelievably moments of serendipity that makes you groan loudly because by the then, this story has gone off the rails. 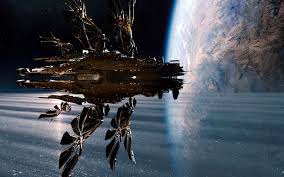 The film is sumptuous to look at with amazing rocketships, costumes, cityscpaes, and tech gear, Everyone from Kunis to Redmayne is attractive and scrubbed to a glistening sheen. The special effects are lovely making you ignore much of the nonsense dialogue, thin characterization, and lapses of logic. Making fun of the government offices requiring a reincarnated heiress prove her legitimacy is a fabulous notion then the Wachowskis made it resemble Earth way too closely down to a cameo from Terry Gilliam, who did similar things in his own films.

The movie looks just fabulous in high definition with an impressive video transfer with matchless audio. None of it makes up for the nonsensical story, but boy, it’s pretty watch although Michael Giacchino’s score sounds crisp yet tired.

The film comes on Blu-pray disc, supported with the standard assortment of features, none of which feels out of the ordinary or particularly special, much like the film itself. We have Jupiter Jones: Destiny Is Within Us (7:00); Caine Wise: Interplanetary Warrior (5:00): The Wachowskis: Minds Over Matter (7:00); Worlds Within Worlds Within Worlds (10:00), letting us finally linger over the cultures, alien races, planets, fashion, androids and designs;  Genetically Spliced (10:00); Bullet Time Evolved (10:00), a look at the latest rev of their patented special effect;, and finally, From Earth to Jupiter (And Everywhere in Between) (10:00),  an attempt at sorting through the film’s plot.