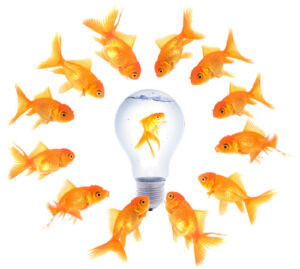 Oh what an age we live in! Marvel banks billions at the box office. DC hits homerun after homerun on the silver screen. And Boom!, Avatar, IDW, and Image continue to stretch the boundaries of the original source medium like no one before them. Yet, it’s we, the lil’ indie folks that are living in the most golden of ages. Why? Because the marketplace has found a way to make us matter; to give us a national (if not international) fanbase all at the click of the mouse. And now, before any art is ever born (outside some sizzling promotional pieces) whole projects can be given birth at only the pitch level. Rao bless you, Crowdsourcing.

Of course… they say the Devil is in the details. Right? Back in 2011, when Unshaven Comics was nothing but a lowly anthology series and an educational graphic novel, we opted to use Kickstarter to fund a dream – the creation of a cosplay suit of armor for our Samurnauts series. We had high hopes that if we really stretched out our arms and begged every single person we knew, we could raise the necessary funds (A whopping $1100 to cover the design, materials, and labor to produce a very high quality suit by some great artisans, Malmey Studios). Well, after an agonizing month of hustling? We succeeded. And in funding the suit, and sending out the prizes? We were left in the hole. When the magnificent suit arrived, we couldn’t be happier. And the joy that our live model (both in the suit and in the book, natch) brought to the kids at various cons over the next 2-3 years? It was well worth the effort.

What tickles me to no end is that what we raised then is a mere pittance in comparison to what our compatriots are pulling down today. And to be honest? It scares the poop right outta my colon for our chances, now that we ourselves are considering returning to crowdfunded-fracas. Even funnier? When Unshaven Comics needs 250 people to vote for them, for free, we’re still having trouble. But I digress.

I look no further than my northernly neighbors Tom Stillwell or Gene Ha, and marvel at their recent successes. Stillwell’s Fangirl garnered over 300 backers, and tipped the scales at over $12,000 to help him produce his excellent story of a murder mystery taking place at the largest comic con in the nation. And hey, if that sounds like you want a copy, look no further for a pre-order. And ole’ Gene? Well, not that long ago, he was begging Unshaven Comics for tips on attending a comic con successfully (no lie! He wrote about it here). And now? He’s proven how much of a powerhouse he is, with his Mae graphic novel project boasting over 1,300 backers, and more money than I’d like to type out. Girl power, indeed.

It would appear perhaps these successes are a boon; that finding a fanbase is totally doable, and with the right moxey, the money needed to see our dreams become reality is just a little elbow grease away. But alas, that’s the kind of fluffy talk that sounds wonderful until you try it. Back in October, my Unshaven cohort, Kyle Gnepper, sought backing for his project Toolbox. It’s a strong concept, paired with a wonderful artist (and no, I’m not talking about me, or the other Unshaven guy). But with all his gumption, moxie, and lucky rabbits feet in tow, Kyle was only able to see close to half his needed goal. In the fallout, he’s been paying for the project anyways, a page at a time. His passion – no different than Tom’s, Gene’s, or any of the other successes we know – wasn’t the key to success.

As it were, name recognition matters. The time you debut your campaign matters. The time you promise it takes to bring the completed project to market matters. The price-points of your wares matters. I could go on. What was once a breezy and open marketplace is now its own economic ecosphere, held in place by unseen forces and unknown rules. Where promotion was once tethered to your facebook fan page, a few reddit groups, and maybe your dusty e-mail newsletter list… is now a fully-developed campaign where updates are a necessary evil, along with stretch goals, and swag far beyond the standard tee-shirt or sketch promise. Heck, in the successful campaign for Albert the Alien, I paid a handsome fee to ensure Unshaven Comics be drawn into the book. Why? Because my money was burning a hole in my pocket, and the guy running the show, Trevor Mueller, is too damned nice.

So, here I sit, with a litany of burning questions broiling in my draft folder for those smarter than myself (it’s a long list, trust me). Does Unshaven Comics actually have a shot at seeing several thousand dollars for a graphic novel of our Samurnauts series? If so, should we be launching it before all the material is done, to ensure we’re far enough away from the holidays so-as to attract wandering buyers? Do we go with IndieGoGo where failure is far harder to achieve (with a lower bar to victory), or go all-in with Kickstarter? Do we seek way-out-of-the-box merch tie-ins for bigger backers? Do we offer wacky and wild limited prizes? Do we call in every favor owed to us by known names in an attempt to garner attention from those who likely don’t know or care to know us? Do we plan a staged coup at a big-time comic con in hopes of being written about on CBR, Newsarama, Bleeding Cool, or Ain’t It Cool News?

The answers, my friend, are all yes. Stay tuned for my greatest leap of faith, perhaps ever, in comics.