This was originally written for ComicMix. The perfect storm of self doubt (Me??) my paranoid thoughts (yeah, that one fits) prompted me to send it to Bleeding Cool instead.

ComicMix has an article of mine sitting in its cue that’s been sitting there for weeks.

No doubt because of another perfect storm fueled by Murphy’s Law. Just one of those things I’m sure was no one’s fault.

When I saw it still wasn’t up today, my willingness to be THIS forthcoming evaporating like the last vapors of a meth pipe I pulled the trigger and sent it to Bleeding Cool instead of a kick ass article on Brotherman that will have to wait until next week.

As is my policy I don’t duplicate the same article for BC and CM but if something’s important enough to me I want it t be seen on both sites so I’ll go back and add or edit things accordingly.

I don’t see why this isn’t a common practice (is it?) attitudes and points of view change with the wind and if writers are honest and are given the chance why not go back in and write what the hours or days have brought since the original piece was written.

If by chance you’ve read this on Bleeding Cool, it’s the same article with added insight and perspective. I hope you give it a read also.

This story begins with me sitting on the floor of my bedroom. How long ago is really to chilling even for me to write so y’all will just have to use your imagination. After enduring yet another night of uncontrollable pain, fueled by severe insomnia, migraines and painful memories, I was convinced putting a bullet my head was the only way to stop the agony.

Not wanting to give up hope I started to pray. That will come as a surprise to many but I’m trying to get closer to God. Yeah, freaks me out also.

After praying for the usual, deliver me from etc, etc, I prayed for a Cosmic Cube.

Clearly I was desperate. 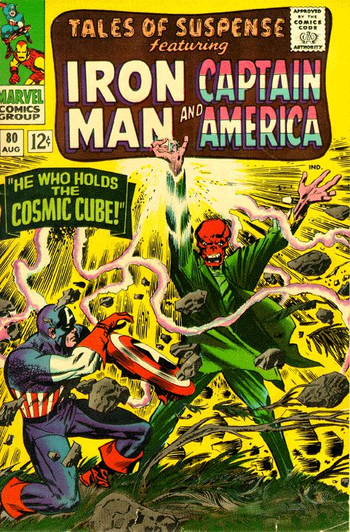 For those reading this not aware of what a Cosmic Cube, is allow me to enlighten you. Captain America first encountered the Cube when fighting the Red Skull back in the good old Lee and Kirby (Stan Lee and Jack Kirby) days of the sixties.

You’re seen the cube, it’s the shiny, energy box thing in the Avengers and other Marvel movies. That’s a Cosmic Cube, although they call it some other silly ass name.

What does it do? Simple, the Cube can make anything real.

When you’re in the kind of pain I was in it makes perfect sense to pray for something you know doesn’t exist but I wasn’t doing that. It does exist. I know, because I have one, or I did.

All I needed was a minute, hell, less than a minute with the cube and all would be right in my world. Throughout the day, no cube materialized. Nah no cube, I did however, have a gun.

With the note done, parts of which you’ve read if you’re a regular reader of mine. If not and you’re curious, check out the Middleman and the Middleman revised on ComicMix and Bleeding Cool. Now all that was left was to give up the fight.

I’m fighting what I now know is severe depression, along with the kind of physical pain I was convinced would not stop unless I got the fuck out of dodge.

Funny, I remember thinking, my first girlfriend, Yvonne, named her bedroom, ‘Dodge’ and I never wanted to get out of there. Strange the things you think of when you’re facing a major life moment. I wasn’t thinking straight (as if I EVER) and pain makes you do stupid, stupid things.

I have HIGH tolerance for pain. I’ve been in constant pain since I was 15 but have a handle on it, this was another level entirely. On this day I could hardly see most of the day, blindness part of my migraines when they’re really bad.

Really bad would have been a Godsend, this was the worst of the worst and that’s saying something. During those, I turn off the lights and silence whatever I can, first and foremost, my cell phones of which I have three. Earlier I found two but was unable to find the third one before I had to close my eyes from all light.

While reaching for something else, I found the third phone just as it started buzzing. For the first time in hours I opened my eyes.

I open my eyes and behold, the Cosmic Cube.

Cleverly disguised as a caller ID on an IPhone, my Cosmic Cube; Tatiana El-Khouri finally arrived.

Tatiana, once a protégé, then my assistance, then partner, now a force independent of me. Tatiana who won’t change the game; she’ll break the game. To quote Mr. Mars, don’t believe me? Just watch.

Tatiana the scary talented creative force whom I love her with all my heart saved me. Although, I wonder why she did as my behavior towards her sometimes seemed, anything but love.

I’ve said horrible things to her. Doesn’t matter why I did. I never, ever, should have spoken to her the way I have. I’ve said many times, I have no shame. I tell people, what you see is what you get and if they don’t like it, I could give a fuck.

I do give a fuck. Something I should have realized when my sister from another mister, Janice asked me to stop making Asian girl jokes. Without a second thought I did, you would think that would have given me a clue.

Tatiana, I’m ashamed I ever spoke to you in such a manner. I was wrong. I’ve been wrong in a great many things it seems.

All of those occasions were my fault. Every single one of them, my fault.

Because of my demons and my inability to be any other way when faced with those demons when I fuck up, I fuck up.

Last week my assistant James Rhodes left my studio. There’s nothing more I can do for him. He left because he’s smart enough to know what he needs to do. Its safe to say the last year and a half James has learned nothing new from me and could have left at any time. He didn’t.

Those were (are) very dark times. He didn’t have to stay but he did. I’ve learned a whole lot from James. He took care of me when I needed a friend and I didn’t see that either. It seems the closer someone is to me I miss that. Yeah, its part of the illness but fuck does that suck or what?

James, you’re like a son to me. You’ll never know what you’ve done for me. I’m sorry I couldn’t do the same for you.

It’s my birthday today or was yesterday, depending when the column will run now. Glenn from ComicMix said he would get it up (yeah, I noticed the jokes Glenn) when I sent it but I’ve taken a lot more than the 2 hours I said I needed so who knows if it will still be my birthday when its up.

Since Jean left me a birthday greeting at midnight exactly, followed a nano second later by Sheila, my phone hasn’t stop buzzing. I’ve gotten gift after gift of love in the form of texts, emails, phone calls (except for one all went to VM. Sorry, busy balling like a girl) and 4 packages delivered to my house. Its 8:40 pm now.

Tatiana just texted me from Studio City asking what I was doing.

Because of her and people like my family at ComicMix I’m doing better.

Thank you all for helping to get me there.

Now, send me nice comments and some hugs…or some Colt 45.

It’s downright upright and so am I.