BOB INGERSOLL: The Law Is A Ass #354: BATMAN’S NO LONGER A FIDUCIARY BAG 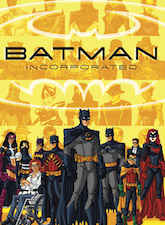 At first he wasn’t a thief. Then he was. Now he isn’t again thanks to Batman, Incorporated.

Last week I wrote that every time Batman appropriated prototypes from Wayne Enterprises  projects and adapted them into Bat-tools, he was stealing from the shareholders of Wayne Enterprises. I’m happy to report that as of Batman and Robin v 1 16 http://dc.wikia.com/wiki/Batman_and_Robin_Vol_1_16, he stopped being a thief.

In that landmark issue, Bruce Wayne publicly admitted that he had been secretly bankrolling Batman’s operations for years. Then Bruce announced his new initiative; Batman, Incorporated.

Batman, Incorporated is an international organization in which Batman franchised out his brand to crime fighters all over the world. He engaged surrogates in locations as diverse and wide-spread as England, Argentina, Africa, Hong Kong, Australia, Paris, and Japan. Even that far-off and exotic land of South Dakota. Batman, Inc., also included Nightwing, Red Robin, Robin, Batgirl, Frank, Dino, and Sammy. You know, the Bat Pack. Batman, Inc. is fully funded by Wayne Enterprises. According to the DC Comics online database, it’s even part of Wayne Enterprises’s security personnel.

The first, and easiest, justification would be that Batman, Inc. was paying Wayne Enterprises for the equipment, just as a local police force purchases Chargers to be patrol cars and pays Dodge for the cars. That way the shareholders are happy because Wayne Enterprises, thus they, make money by backing Batman, Inc.

I said that’s the simplest and easiest justification. I doubt that’s the one being used. There’s no indication that Batman, Inc. has any sort of income or revenue stream which could generate the monies necessary to pay for all the stuff and services it was getting from Wayne Enterprises. I’ve certainly never read about Batman, Inc. setting up its own system of online currency, the Batcoin. So let’s cross off the possibility that Batman, Inc. is paying Wayne Enterprises and look at the next method of mollification that Bruce could use.

Section 501(c)(3) has a list of some of the functions that organizations can perform to qualify as charitable organizations. Among them are, preventing cruelty to children, lessening the burdens of government, and combating community deterioration and juvenile delinquency. As a crime-fighting organization, Batman, Inc. does any of those.

If Batman, Inc. were a 501(c)(3) – or other charitable organization – Wayne Enterprises could take a tax deduction for all the goods and services it provided to Batman, Inc. and lower its tax burden. If it’s paying less taxes, then its profits are higher, which satisfies the shareholders. You don’t have to be a member of TEA Party to know that less taxes makes people happy.

But what if Batman, Inc. weren’t a charitable organization? There’s still another justification that Bruce could use for funding Batman, Inc. Bruce could point out that by funding Batman, Inc., Wayne Enterprises was helping to lower crime and making the world a safer place. That would generate enormous good will for the company and make the world think of it as a benign corporation that was doing good work. When a company is perceived in such positive ways, people are more likely to do business with it. So by doing good work through funding Batman, Inc., Wayne Enterprises could increase its business and, thus, its profits. This is why some corporations do things such as donate body armor or body cameras to police forces. For the good will it engenders.

Even if there wasn’t any good will involved, Bruce could argue that by funding Batman, Inc. he’s making Gotham City and the world a safer place. That benefits the shareholders, because it means they’re not as likely to get robbed. And it benefits Wayne Enterprises financially, because it’s not as likely to get robbed, either. As someone who has been robbed at gunpoint, I can tell you from experience; not being robbed makes you happier than being robbed does.

Those are among the emotionally satisfying ways that Bruce could justify funding Batman, Inc. to the Wayne Enterprises shareholders. The feel-good justifications. There’s one more which is every bit as practical, just not as touchy-feely. Remember, Wayne Enterprises hired Batman, Inc. as part of its security force. If a corporation is going to hire security personnel, it’s got to supply them with uniforms and equipment, doesn’t it? You can’t have your night watchmen running around naked and without flashlights. How would you make a successful movie franchises about museum guards or mall cops, if they had rampant nudity and were rated X?

So there you have it. Batman’s fixed. He’s back to the way he started out so he’s not a thief anymore. Now if we could only do something about getting him back to being the other way he used to be when he started out. You know, just being neurotic instead of psychotic.