Christopher Nolan thinks big. There’s little question he has an impressive imagination and his body of work speaks to those larger issues. Often writing with his brother Jonathan, they have produced a series of films with a polish and gravitas that few other big budget spectacles can match.

And yet, in almost every case, the lapses in story logic rob the movie of its power so you always walk out of the theater shaking your head in bewilderment. The great ideas and execution found in Memento and again in Inception are spoiled in his other films, notably The Dark Knight Rises. Such was the case with Interstellar, coming to home video via Paramount Home Entertainment this Tuesday. The larger theme of where we do go when we ruin the Earth beyond repair is a timely one as more and more reports indicate this is the century we hit the ecological tipping point.

In a near future that looks remarkably like 2014, a blight has decimated the world’s ability to feed its growing population. Federal resources have been yanked from programs that do not directly address the problem or so people are led to believe. It turns out NASA has become a black book operation, off the grid and dedicated to finding somewhere for us to go. 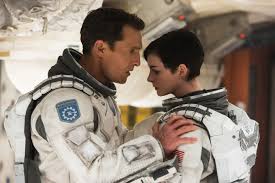 From there we’re propelled into the story of Joseph Cooper (Matthew McConaughey), a former NASA pilot turned farmer, raising his children Tom (Timothée Chalamet) and Murphy (Mackenzie Foy) on the family farm with his father-in-law (John Lithgow). Murph thinks her room is haunted until she and Coop realize there are messages and coordinates being sent by some intelligence. They follow the message and find NASA, which just happens to be in need of a pilot for their last mission. Just like that, Coop says goodbye with a promise he’ll return, while he rockets off towards a wormhole and whatever may be on the other side. Accompanying him are biologist Amelia Brand (Anne Hathaway); physicist Romilly (David Gyasi); geographer Doyle (Wes Bentley); and robots TARS (voiced by Bill Irwin) and CASE (voiced by Josh Stewart). Back on Earth, Brand’s dad, Professor John Brand (Michael Caine), promises he will solve some of the physics that will help determine how to get millions from Earth to the stars. In time, the adult Murph will join his quest.

Basically, the entire second act of the film gets us to the other side where one of the three potential new homes for humanity turns out to be a watery dud and the second one is a frozen wasteland. There, they find Dr. Mann (Mat Damon), long believed dead, and here the conflict escalates with the fate of civilization hanging in the balance. Oh year, and thanks the time dilation effects from the wormhole, hours to them become years back home so video recordings show us Murph (Jessica Chastain) and Tom (Casey Affleck). growing up. Then things go very, very bad.

And then they get outright weird. Nolan offers us a heady homage to 2001 with the Tesseract within the black hole and all sorts of gibberish follows until the inevitable return to earth.

So, we’re left asking lots of questions about how the time dilation really works, why the gravity of the black hole doesn’t crush everything in its path, how it is anywhere near Saturn without wrecking the solar system, and so on. Coop spends zero time training to fly the new vessel or get to know the crew but when push comes to shove, he coaxes the starship to do amazing things that provide some of the few thrills. Other story logic questions plague the third act as well but for those who haven’t seen it yet, I’ll leave those alone.

For a movie that hinges largely on the relationship between father and daughter (now Ellyn Burstein), their meeting in the waning minutes is surprisingly mild and anticlimactic. Similar emotional peaks and valleys are missing from the film which spoils some fine performances, notably Mackenzie Foy’s young Murph. Some of the most intense moments are when Coop returns to the ship after the first world and catches up on 23 years of video messages from his kids. It stands out because so much is missing from the rest of the film.

As a story, it feels like bits and pieces have come from elsewhere, especially Stanley Kubrick’s head-scratching 2001. There is, therefore, one plot twist I didn’t see coming and it was a welcome surprise given how much else was predictable. Even so, so much remains unexplained, all of which robs the film of the greatness is aspires to.

The high definition transfer nicely mixes the widescreen 2.39:1 and IMAX full-frame 1.78:1 ratios, using the storytelling to help. Only true videophiles will be concerned with the little nits in the look of the film. The rest of us will think it looks just fine, albeit diminished, on our home screens. If anything, the DTS-HD Master Audio 5.1 lossless soundtrack is even better so together, it makes for a fine viewing experience.

While the combo pack boasts three hours of special features, the film’s missing coherence is not here. Instead, there’s a dedicated second Blu-ray disc that starts off with The Science of Interstellar (50:20) as Matthew McConaughey narrates a look at the film’s scientific foundations. Consulting Scientist Kip Thorne looms large here, as the feature explores the film’s themes and the current theories on finding life in the universe, space-time, wormholes, black holes, and the theory of relativity.

After the engaging science, we move to the fanciful stuff under the umbrella title Inside Interstellar. There are fourteen features of varying lengths, exhaustively looking at the music, mechanical beings, starship designs, miniatures and so on. The final piece has the cast and crew reflecting on the film’s goals and hopes for the future. For the record the pieces are Plotting an Interstellar Journey: (7:49); Inside Life on Cooper’s Farm (9:43); The Dust (2:38); Tars and Case (9:27); The Space Suits (4:31); The Endurance (9:24); Shooting in Iceland: Miller’s Planet/Mann’s Planet (12:42); The Ranger and the Lander (12:20); Miniatures in Space (5:29); The Simulation of Zero-G (5:31); Celestial Landmarks (1080p, 13:22); Across All Dimensions and Time (9:02); and,  Final Thoughts (6:02). Overall, these not only vary in length but in detail and interest but there’s certainly something for everyone.

The combo pack does also offer up a nifty and collectible IMAX film cell.