Mindy Newell Is Jus’ Ramblin’ On 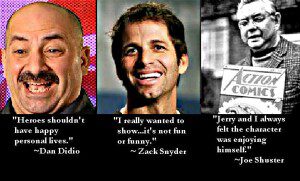 Just a bunch of random thoughts this week, gang…

As I mentioned two weeks ago, Martha Thomases and I go waaaay back to the days when she was DC’s go-to woman for marketing and promotions and I was a naive, newbie freelance writer for the company who always stuck my head in her doorway (“hey, Martha”) whenever I was in the office. We have always been kindred spirits in political thought and our taste in literature, television, and moves have always coincided more than they have diverged, and now Martha’s latest column extends that coincidence to some critics.

Martha, you have more patience than I do; I couldn’t even finish the piece because I got so annoyed. So, yeah, I’m not an A.O. Scott fan, either, although I do think he writes beautifully. In my not-so-humble opinion, Mr. Scott is a bit of a snob and a critic in the Rex Reed mold – meaning that he seems to actually enjoy tearing down anything that smells of popular culture because in Mr. Scott’s world “popular” is a euphemism for a four-letter word.

Martha’s column made me wonder if Mr. Scott would have decried Mark Twain’s Adventures of Tom Sawyer (1876) and his Adventures of Huckleberry Finn (1884) or Robert Louis Stevenson’s Treasure Island (1883) and Kidnapped and The Strange Case of Dr. Jekyll and Mr. Hyde (both in 1886) or James Fenimore Cooper’s The Leatherstocking Tales (of which The Last of the Mohicans (1826) is the second book in the series) or Lewis Carroll’s Alice’s Adventures in Wonderland (1865) and its sequel, Through the Looking Glass, and What Alice Found (1871) as “the death of adult American culture” if he had been employed as a critic in the eras in which these classics of American literature were published.

Writer Chuck Dixon posted the photo posted above on his Facebook page, courtesy of Iconic Superman’s own FB page. I thought it tied in nicely with Marc Alan Fishman’s column this week about the trials and tribulations of a mother and her Batman-obsessed four year-old. I do agree with Marc that it is not generally the fault of the media but the fault of the parents when children are exposed to things that are “rated M for mature.” Parents should – make that must – be aware of the contents of a book, a television show, or a movie and they must be responsible for the interactions of that child with said media. However, I also feel sad that our comics icons (Superman, Batman, Wonder Woman) are, for the most part, reflecting the grayness of the adult world, the ugliness that is present in the world.

Yes, I know about the comics and cartoons (excuse me, animation shows) geared towards children, but overall, our four-colored heroes are reflections of us, the adults, and are not the standard bearers of positive ideals they should be – and, yeah, I sound like an old fogey, and not the same person who wrote a column about how she wasn’t bothered by that ass-in-the-air Spider-Woman cover. So am I a hypocrite? After all, as an adult, yes, I love writing and reading stories hewing towards the darker side of heroism and life; hell, one of the best stories I ever wrote was about a young girl who runs away with the “bad boy,” has a baby, and ultimately leaves both the kid and the father because she just can’t stand it any more (“Found and Lost,” New Talent Showcase #13, January 1985).

But as a mother, I once told Alixandra that I didn’t care what she watched or read or listened to, except I didn’t want to hear gangsta rap in the house because I didn’t want to hear songs about how the singer was going to cut up and/or kill his bitch (I also told her that I knew she would listen to it outside the house or at her friends’ houses, but in “this house you are not going to play it.”) And as a grandmother, I once tied an apron around my neck, and ran around “singing” the theme to Superman: The Movie in front of the baby (who just stared at me like I was an idiot – he was probably thinking: “this is a grandmother?”

Outlander (on STARZ) has drawn me into its spell. Much less a “bodice ripper” (see my column from a couple weeks ago) than a really, really excellent time-travel story, I told you before that I originally tuned in because Ronald D. Moore was producing it. I have not been disappointed. The dialogue continues to seem realistic and natural, the history of the period has been well researched, and English actress Caitriona Balfre does a wonderful job portraying the time-displaced heroine, Claire Randall, who, while becoming entwined in the life of the MacKenzie Clan and the Jacobite movement, which aimed to place Bonnie Prince Charles on the throne of England, still aches for her husband and life in 1945.

This past Saturday’s episode, which focused on the wedding night between Claire and Jamie, was not only incredibly sensual and sexy – I mean H-O-T, people! – it also was one of the most mature depictions of two people, basically strangers, thrown into an intimate partnership I have ever seen on the screen, big or little. This coming Saturday is the “mid-season finale” – like many shows on television these days, especially on cable, STARZ has chosen to follow the British style of short seasons – the “leave them wanting more” approach. I get it. And I know that STARZ has already renewed the show for a second season. But just how long am I going to have to wait? (If anybody knows, please leave a comment below.)

Like the rest of us, I sometimes wish there were real superheroes (men and women) so us ordinary people wouldn’t have to worry about things like global climate change and terrorists and war. As if fucking ISIL isn’t scary enough, yesterday I read an article in the New York Times about a Syrian terrorist group, led by a member of Bin Laden’s inner circle who was in on the planning of 9/11, whom the nation’s intelligence agencies deem more of a direct and more imminent threat to the U.S. than ISIL. (By the way, don’t ever use the phrase “protecting the Homeland” around me. There was a political leader in mid-20th century Germany who looked like Charlie Chaplin’s “little tramp” who liked to use that phrase.) And of course with President Obama’s plan to “train and arm rebel groups in Syria” having passed Congress, I’m betting that some our arms and training falls into the hands of these guys.

I have been a big supporter of President Barak Obama, but I gotta tell ya, I don’t know what the fuck President Obama is thinking, getting in bed with groups and nations who either don’t particularly like us or outright hate us. I keep thinking about Franklin Roosevelt and how he knew that we needed to get into the war in Europe to stop the Nazis, but with an isolationist Congress and America the best he could do was the Lend-Lease Act, by which he could supply Britain, the Free French, the Republic of China, and eventually the Soviet Union with arms and other war supplies. Perhaps Obama is trying a 21st century version of Lend-Lease, but the lines aren’t so clear-cut, and the “Allies” aren’t really allies at all.

Yeah, we could use a rollicking cry of Avengers Assemble! right about now.