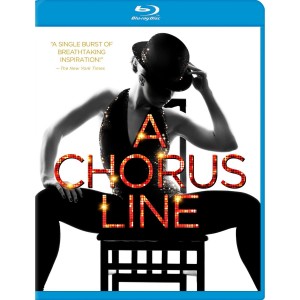 You may not have seen A Chorus Line but most everyone knows the song “One” thanks to its endless use in other productions (think Treehouse of Horror V, Phineas and Ferb, Scrubs) throughout the years. Since the play debuted Off-Broadway in 1975, it has gone on to become one of the best known musicals of the latter 20th Century. One reason it endured a run of 6137 performances on Broadway was its emotional honesty, bare bones set, and soul-bearing songs. As conceived by Michael Bennett, it was brought to life by Marvin Hamlisch (music), Edward Kleban (lyrics), and James Kirkwood Jr. (book) at a time when everyone was doing a little soul searching.

By the time the 1985 film adaptation from director Sir Richard Attenborough arrived, it was heralded as a return of the musical to the movies. Unfortunately, the so-so movie failed to ignite that revival and was mostly rejected by those who adored the film.

The main reason the movie, out now on Blu-ray from 20th Century Home Entertainment, doesn’t work is that the presence of film acts as a barrier between audience and performer. In live theater, you see the ensemble audition, you see them sweat and struggle and can see them in your personal field of vision. With the variety cinematic techniques brought to bear, it becomes less about a class of people (performers) and about a series of individuals all vying for a chance at stardom. Their interactions with the direct, Michael Douglas, is more intimate than it should be.

Bennett was resistant to a film adaptation and didn’t participate and eyebrows were raised when a British director was hired rather than someone who would appreciate the nuances of American theater. He also instituted a series of changes that brought down deep criticism from theater-goers, notably the substitution of the lesser songs “Surprise, Surprise” and “Let Me Dance For You” in place of “Hello Twelve, Hello Thirteen, Hello Love,” “Sing!,” and “The Music and the Mirror”. Whereas the stage production had raw language in its lyrics and had Gay members of the ensemble, the film scrubbed the later elements away, weakening its realistic feel.

Attenborough claims he rejected Madonna, who auditioned to be in the film and instead with a cast filled with largely unknown singers and dancers although today we know Audrey Landers and Janet Jones from the ensemble. They do a fine job but are ill-served by Attenborough, who attempts to replicate the raw stage setting, shot at the Mark Hellinger Theatre, but fails to translate it to film. What he needed was a radical reinterpretation or something to make the story hold up as a feature. Instead, this is a mildly entertaining muddle.

In addition to the desperate performers is the romantic story of Cassie (Alyson Reed), a dancer who left for Hollywood a year ago and failed. Back and hoping to start over, she’s auditioning for her former lover. As a result, Attenborough disastrously repurposes “What I Did for Love” from a story about sacrifice to perform to a paean from dancer to director. What worked as a spine for the stage production has been turned into soapy subplot.

The film is beautifully transferred to high definition so the performers dazzle amidst the stage gloom. This is well matched with the lossless DTS-HD MA 2.0 audio track so the music and lyrics are sharp.

Despite a wealth of available material about the show’s legacy, the disc comes without a single extra feature, not even the Marvin Hamlisch feature that was including on the initial DVD release in 2003.