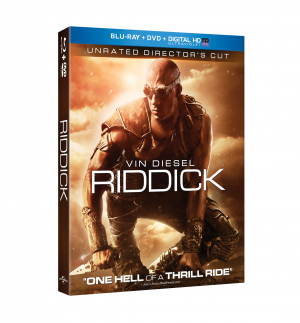 Debuting an Unrated Director’s Cut with even more intense, heart-pounding sequences not shown in theaters and an alternate ending, the Blu-ray Combo Pack includes bonus features that reveal the behind-the-scenes secrets of the heart-stopping thriller’s incredible cast, uniquely talented crew and cutthroat characters.

We shine the spotlight on the Sci-Fi Queen of Riddick 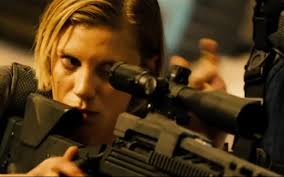 For many sci-fi fans, Katee Sackhoff is a household name of this exciting genre, but you don’t have to be a sci-fi fan to know this woman is a force to watch.

The all-new thriller finds the title character trapped on a sun-scorched planet and pursued by ruthless bounty hunters eager to collect the reward for Riddick’s capture—dead or alive. Savage alien creatures, expansive desert landscapes, monster storms, jet hogs and an arsenal of futuristic weaponry make this the most exhilarating episode to date in writer and director David Twohy’s breathtaking series of futuristic blockbusters.

In celebration of the Blu-ray release of Riddick, we shine the spotlight on some of our favorite roles from Katee Sackhoff.

While her name might be pronounced ‘doll’, she’s anything but sweet in this role.  Sackhoff has said Dahl is probably the strongest character she’s ever played. 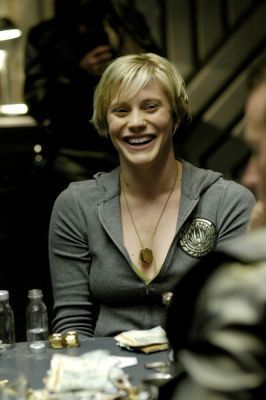 Before playing the role of a sniper in Riddick, fans most enjoyed Katee’s work as Capt. Starbuck in the SyFy network series Battlestar Galactica. For four seasons, she played Kara ‘Starbuck’ Thrace, a pilot and warrior.

2) Herself- The Big Bang Theory

This may be her best role of all, a cameo in Howard’s fantasy. Katee guest stars on two episodes helping our nerdy hero muster up courage to propose to his girlfriend, Bernadette. Bernadette said no to the proposal but what better wingwoman is there for any sci-fi nerd than Katee.

As if there is more reason to note that she’s a standout, she also lends her voice to the live animation classics like Batman, and Star Wars, opposite the Breaking Bad mastermind, Bryan Cranston. 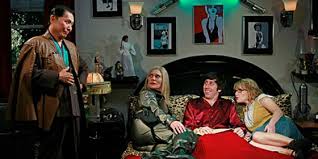 Our friends at Universal Home Entertainment have given us two copies of the Combo Pack. For your chance of winning a Riddick Unrated Director’s Cut Blu-ray Combo Pack, simply answer the following question:

Entries must be received by 11:59 p.m., Tuesday, January 14. The judgment of ComicMix will be final. Open only to readers in the United States and Canada.