“The rumor about Wonder Woman’s movie debut” is, well… 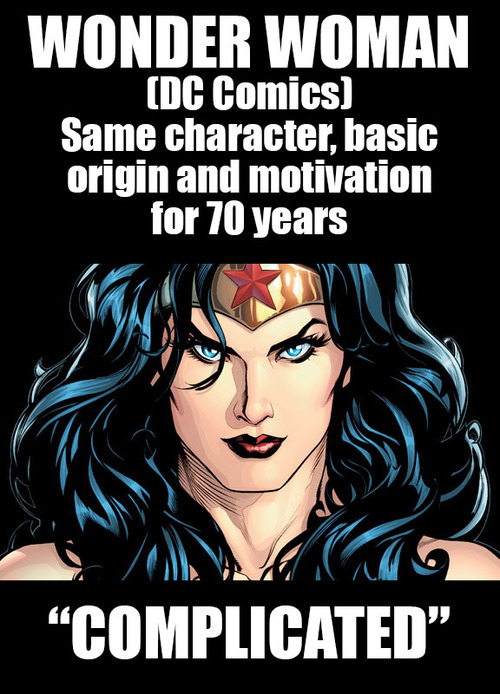 “A lie can travel halfway around the world while the truth is still putting on its shoes.” – attributed to Mark Twain

There are times when the internet overreacts to things.  In most cases, the overreaction is unjustified.  Even if it is against a legitimately unpleasant act, like racism or other acts of cruelty, usually the reaction is wildly overblown, one that can often have a blowback effect and make the target seem like the one that has been wronged.

Now, in reading the original article, one sees that this is not even a rumor, but the writer’s own Clever Theory.  It’s a pure ass-pull by the writer of what he thinks MAY happen.  But as soon as the article passes through one round of Chinese Whispers, it’s turned into a “rumor”, and I’m sure within a couple more, it’ll pop up with script samples and more “proof”.  We live in a world where the Worst Case Scenario is often the first case considered.

The articles that have sprouted from this have all circled around the idea of “I knew it!” and other such resigned aspirations. People are calling back quotes from WB executives who have described the character of Wonder Woman as being “complicated”.  So the idea of “dumbing down” the origin, or shit-canning it entirely, seems a perfectly logical response from a Hollywood executive.  So we have no problem believing such flummery as, maybe not the emis, but at least possible enough to break out the pitchforks.

There is a lesson here, perhaps two.

For the readers…scroll back up the chain a bit.  Don’t just read the story you found, but the one the writer links to, and if necessary, back to the original story, if indeed such a story exists.  Remember that much of what’s written on the Internet is written with a goal of drawing eyes to the story, over and above all else.  And so, if a fact or two is left behind, or trampled in haste, well, it all works out in the end, eh?  There are times I think some websites should be published on a yellow background, if you know what I mean.

For the executives at the WB – look carefully on how quick, vehement and virulent the reaction to this story has been, and it’s completely vaporous.  Imagine how bad the reaction is going to be if they hit one with a kernel of truth.  There are a LOT of people who have invested a great deal of hope and emotion into this upcoming appearance.  You should be greatly cautios in your actions with her.

There’s a bit of American History that applies here. A hoax news story was circulated that President Abraham Lincoln was planning to draft an additional 400,000 soldiers to fight in the War of Northern Aggression Civil War.  The reaction was…let’s go with “strong”.  There was a great hue and cry, and more interestingly, the price of gold went up, which was the ulterior motive of the men who planted the story in the first place.

Here’s where the story leans into, fittingly, rumor. The story goes that Mr. Lincoln had originally planned to conscript even MORE than 400,000 men.  But when he saw the reaction to a lesser number, amended his plans accordingly.

Please note, and emulate, the great wisdom of this great man.