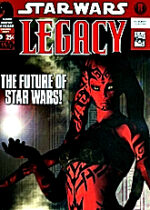 The news came down publicly on Friday that, in 2015, the Star Wars comics license will move from Dark Horse, who has had it for more than two decades, to Marvel, which had it at the franchise’s inception. It’s not a big surprise; since creator George Lucas sold it all to Disney, and Disney owns Marvel, many saw the move as inevitable.

I have had the pleasure of playing in George Lucas’s sandbox for more than ten years, most often with my artistic partner in crime, Jan Duursema. At first it was only going to be a four issue story arc. My buddy and Brother by a Different Mother, Timothy Truman, was the regular writer on the book at the time and he was taking some time off to work on a special project. He recommended me for the fill-in, one of the many favors I owe Tim.

When I got the first assignment, I knew this might be the only chance I ever got to write Star Wars. I decided we should create our own characters; that way, we were less likely to trip over established continuity. I wanted an amnesiac Jedi – a Jedi who had sustained a head injury and didn’t know he was a Jedi.

Jan was brought on board as well and, I have to say, she was and is a larger SW geek than I was. What I didn’t know about that galaxy far far away, Jan did. She decided she wanted to create a look based on a character from the films, the current one at that time being Episode One: The Phantom Menace. She found a figure who was in the background of a cantina scene. Let me point out that the character appears for maybe three seconds and there was no DVD of the film yet; the only place to see it was on the screen. Jan not only spotted the character but memorized him in those three seconds. Yeah, she’s that good.

And so was born Quinlan Vos, our first Star Wars character. He was joined by Vilmahr “Villie” Grahrk, a devilish-looking Devaronian who spoke like a Russian and was a complete rogue. Man, I loved writing that character! Rounding it all out was Quinlan’s missing apprentice, a female Twi’lek named Aayla Secura. George Lucas would later like the look of her so much he put her in both Episode II and Episode III. I think that was perhaps the only time a character started in the comic and went to the movie instead of the other way around. She and Quin also wound up in the animated version of The Clone Wars.

When Tim decided not to return to the ongoing, I was invited back. At the time, the book would switch artists and writers with almost every arc. I suggested to DH that, whether it was me and Jan or not, there should be a regular team and the book should have its own cast of characters. My argument was that it was hard to build a reliable fan base for the book if it constantly changed identities. Having their own characters that could (mostly) only be found in the book would also be a selling point for readers. DH bought the idea and Jan and I wound up as the regular team.

When Episode III came out (they killed Aayla!), that era was essentially done and Jan and I had to look for another. One of my problems with the Prequel Trilogy is that it went backwards in time; when I like a story, I want to find out what happened next. So I suggested to Jan and Dark Horse that we dropkick the franchise down the timeline, past the movies, past the books, and tell that part of the story. Our protagonist, Cade Skywalker, would be a descendent of Luke but Cade was very different. He was a junkie, a rogue, and he wanted nothing to do with the Jedi. My pitch for the character was – what if Han Solo had a lightsaber?

We named the book Legacy and it was, perhaps, the most successful book Jan and I did in Star Wars. We had new Sith, a resurgent Empire, and Imperial Knights – Jedi-like Force users working for a more benign Empire. The cast was huge and we had a chance to tell all kinds of stories for more than five years.

After Legacy ended, we cast about what to do next. I suggested that, having gone forward in time, we now go back. How did the Jedi become the Jedi? I figured that was a story fans would find interesting. As a fan, I wanted to know. Out of all that came Dawn of the Jedi, the series that Jan and I are currently working on and which will be our last Star Wars story for Dark Horse. In addition, I’ve had the chance to do various Specials and one-shots, as well as Agent of the Empire, which was one part Star Wars and one part James Bond. I had a lot of fun on that one.

So – is that it? Have I written my last Star Wars comic? That’s up to Marvel now but I have hopes. Both Jan and I bring a lot to the table. First off, we know how to write Star Wars so that it feels like Star Wars, even when not dealing with the usual characters. Every story we do has to be approved by Lucas Film Publishing and Jan and I have never gotten a story rejected. We get notes, yes, but not rejections. That’s not easy to do, let me tell you. Jan and I are good at what we do. How do I know? Because we sold well and we have our own fans (and I deeply appreciate them).

Will all that be enough? I don’t know; I’ll certainly contact Marvel and pitch to do more stories. I love Star Wars and I think it shows. Marvel may not yet know what they want to do with the franchise. They don’t get control of it until 2015 which is when Episode VII comes out and that will probably help decide more than few things.

Whatever happens, I’ve had a good run and got a chance to tell some fun stories set in a galaxy I love a lot. I also have some other projects I’m developing and some of them are also SF so I won’t stray too far.

I want to thank Dark Horse, the editors – especially Randy Stradley – and all the very talented people I’ve worked with.