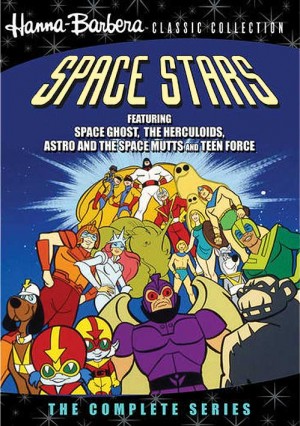 By the 1980s, the cartoon creations of the 1960s must have looked pretty tempting given the failure of so many properties from the decade in between to latch on to the hearts and minds of the young television viewers. After Scooby-Doo’s triumphant arrival, so many series came and went, aping the premise or adapting films and television series with little to show for the effort. It must have made sense, then, to dust off the last round of interesting space age series, produce a few new episodes, and cram them together for a potpourri hour-long romp. And so was born Space Stars, which lasted all of a season on NBC. An opportunity for new Space Ghost tales and a new adventure with the Herculoids can’t be beat. To freshen the batch, though, Hanna-Barbera decided to offer up Teen Force, inspired by ABC’s The Mod Squad, and a Jetsons spinoff featuring Astro and the Space Mutts. The Teen Force each had a power (of course) and the requisite Astromites for pets/sidekicks. Meantime, Astro somehow left George behind to begin working with the heroic Space Ace (unrelated to Don Bluth’s not-yet-released arcade game), alongside newcomers Cosmo and Dipper.

The stories are mediocre and the animation as limited as usual but there is a charm to these heroes that still speaks to my 8 year old’s heart. Better yet, the continuity buff in me liked that all the characters cameoed in each other’s stories, setting up an early H-B shared universe. It’s also cool to see the Space Star Finale where Space Ghost, the Herculoids, and Teen Force take on one extremely disappointing bad guy.

The three-disc set from Warner Archive comes complete with the previously unseen since broadcast Space Science interstitials, created to appease worried parents. For me, this is a welcome package of cool stuff and well worth a look.

Addendum: Daniel Ferrante at Warner Bros. reached out and corrected some information: “the Space Science interstitials were never aired at all – we found the footage at the end of the reels and reconstructed where they were meant to be placed, so all the educational segments are seen for the first time anywhere on the DVD. The show was originally scheduled for the previous season and was supposed to run 90 minutes with an additional Herculoids segment and a Jetsons. When the show was cut down to 60 minutes (delay and cut caused by the previous year’s strike) the Space Science segments were cut out ( but thankfully retained, so we could put them back in 30 years later). As a side note for comic folk,  all the educational segments were written by Don Glut.”

Thanks, Daniel, for the intel!