Martha Thomases: Doctor Who and Something… Joyful! 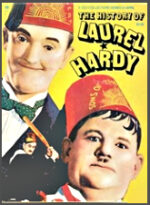 It was Saturday morning and I was at the Union Square Green Market buying dried black beans for soup. It was a beautiful clear cold day, the kind that makes me even more chatty with the people selling the goodies (and, yes, I consider black beans to be goodies. Sue me.). The lovely young woman who took my money commented about being outside all day.

She looked at me with scorn.

“I have to watch,” I said defensively. “I need to be able to talk to my son.”

“You’re a good person,” she said. I interpreted this to mean that I was subjecting myself to something tiresome in order to be a good parent.

I came late to Doctor Who. I mean, I had heard of it but never felt any great need to see it. I thought it might be like Thomas, the Tank Engine, a perfectly fine BBC show for children that I also didn’t want to watch. A character with a colorful scarf did not seem compelling enough to me.

Years went by. My son and I bonded over various media, including the television ventures of Joss Whedon, Homicide: Life on the Street, and assorted, other, cool… stuff .

So when he said I’d like Doctor Who, I listened. But first, I whined. “It’s been on forever,” I said. “I don’t have time to watch decades worth of a series.

So I started. The first episode I saw didn’t thrill me. I mean, it was fine, but didn’t seem to be the kind of thing to inspire a cult. My son said, “Give it time. Lots of people don’t like Christopher Eccleston.”

But he wasn’t the problem. I thought he looked a bit like Jason Statham, and I amused myself by imagining what the program would be like if Jason were The Doctor. Fucking awesome is what it would be.

So I was enjoying Eccleston, but it was David Tennant who won my heart. That is a cute guy. And, as I was relaxing into the show more, it grew on me. I liked his relationships with the various companions, women who were his friends, nothing more and, more important, nothing less. I liked that they were not, for the most part, conventionally beautiful. Billie Piper’s Rose Tyler was dressed to look like she still had some baby fat, Freema Agyeman’s Martha Jones is (you should pardon the expression) black, and Catherine Tate’s Donna Noble was definitely pudgy and had rather coarse features (please note I think these some are beautiful, but my point is simply that they don’t meet Hollywood standards). They were, like most of us at first glance, ordinary. And, as we watched them interact with The Doctor, they revealed themselves to be, like most of us, extraordinary.

Matt Smith is no David Tennant, but he grew on me. I felt the writing for his character got dicey at times, with some of the gags forced, and his resemblance to Stan Laurel was, at times, distracting. But I loved the Ponds. Through them, I grew to like Smith.

I enjoyed “The Day of the Doctor.” It was fun. I suspect I missed a few Easter eggs, since my knowledge of the older versions of the show is limited to the newer episodes, which I know makes me much less cool. However, I have loved John Hurt since he was Caligula, so that was pretty much great.

Before I left with my black beans, I said to the woman, “The thing about Doctor Who is that, no matter how dangerous the situation, no matter how dire the circumstances, the characters are always happy to see each other. They always find something joyful.”