(If) you’re…young; you don’t remember a time when continued stories were rare. But until Stan Lee made them standard procedure at Marvel in the 1960s, they were next to unheard-of.

Those words seem familiar to you? Certainly not, unless you read this department’s blather three weeks ago, when I began a discussion of continued stories in comics, where they – the words – appeared in a slightly different form. And in reprinting them, in a column which is – let’s face it – a continuation of a previous one, I’ve tried to deal with a paramount problem writers face when doing continued narratives: clueing in readers who either don’t remember the earlier stuff or are new to the series.

There is a difference between continuing characters and continuing stories. Continuing characters have been with us a very long time. Even if you ignore the many tales of the various gods and goddesses, those rascals, you can find a continuing character as early as 428 BC, give or take a few years, when Sophocles followed up his smash hit Oedipus Rex with a sequel featuring the same poor bastard, Oedipus at Colonus. Then, over the centuries, there have been various adventures of King Arthur’s knights and other heroes. But these were not continued stories, not exactly. An adventure or episode ended and the characters went into Limbo and reappeared to solve new problems and encounter new hassles. That kind of storytelling continued through the invention of high speed printing, which made books relatively cheap and accessible at about the same time that a lot of people were learning to read. 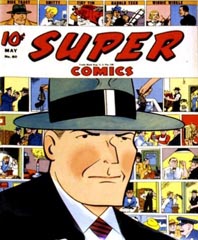 Which brings us to the pulp magazines, a publishing form that began about 1910 and was one with the dinosaurs by the middle 50s. A lot of these cheaply produced entertainments featured continuing heroes. (We’ve discussed perhaps the greatest of them, The Shadow, in this department earlier, and I won’t be surprised if he gets mentioned here again.) Meanwhile, over in another medium, movies were also featuring continuing heroes, ranging from that loveable scamp Andy Hardy to a legion of bad guy quellers, including noble cowpokes and suave detectives. And…in yet another medium, that newfangled radio was presenting weekly dramas about cowboys and detectives and police officers and even federal agents, like the movies only more often. And…here might be an appropriate place to mention comic strips, which began doing stories, as opposed to daily jokes, in 1929 with Burne Hogarth’s comic’s adaptations of Edgar Rice Burroughs Tarzan, and since the introduction of Chester Gould’s Dick Tracy in 1931, were sometimes stretching plots over many weeks.

Those were continued stories featuring, of course, continuing characters. But there were others…Oh my goodness, look! We’re almost at the limit of our allotted word count and we have so much more to discuss. I suppose I could go on for a couple of paragraphs more, but that wouldn’t begin to exhaust the topic, so I guess we’ll just have to – yes! – continue this next week.