Professor Elemental dishes on his “Phineas and Ferb” cameo 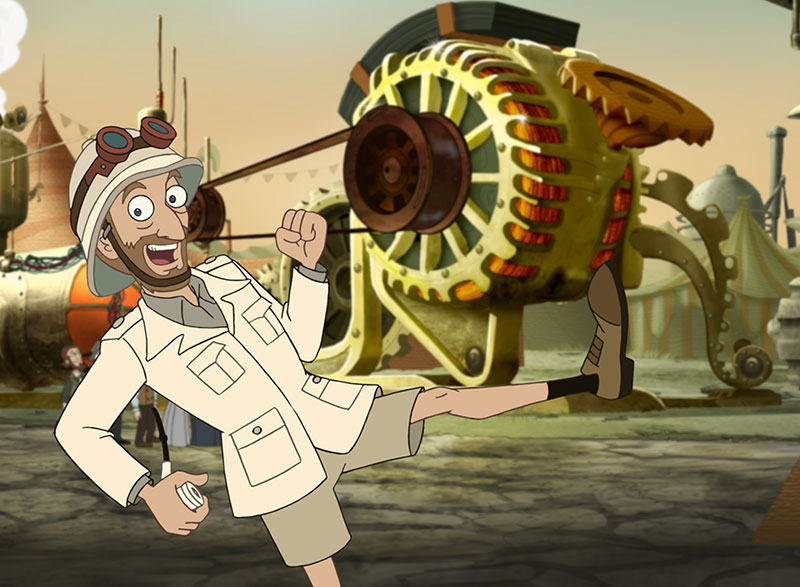 If you’re a fan of the Disney cartoon Phineas and Ferb, like I know I am, you may have recognized the performer of the song for latest episode “Steampunx”.  It was chap-hop impresario himself, Professor Elemental, taking his gentlemanly beats to a new and young audience.  By way of the electric-type wireless, yr. obt. svt. was able to sit the Professor down for a virtual cup of tea and a few questions about his foray into animated entertainment.

How did you and the folks from P&F get together? Who sought out whom?  A lovely exec at Disney got in touch with me and from there I got to chatting with Dan “Swampy” Marsh (co-creator of the show) who kindly asked me along for the ride.

How long ago did this alliance come about, and how long have you been sitting on the surprise? – It was about this time last year I think and it has been very hard to keep quiet about it. Anyone who follows me on twitter will know that I can’t help blathering on about everything all the time, so keeping this under my pith was tricky indeed.
Did you know much about the series before you made your appearance? – I knew the show and had seen a few episodes, but a nice nice effect of getting involved was also watching more and more episodes. Like everyone else with good taste in cartoons, i am now hooked.

What other sort of animated entertainment tickles the Professor’s proverbial fancy? – I am a huge cartoon nerd- growing up it was all Hanna Barbera and it sometimes seems a little sad that most of those characters have got lost over time. Other than that – everything from Looney Tunes & Tex Avery to Disney & Pixar all make me happy. Wreck-it Ralph was the last cartoon film that I completely fell in love with.

Where did you record your parts? Did you get the chance to meet any of the cast, not the least being Richard O’Brien? – They were recorded with Rob Crespo (a great producer that I am working with, should have an EP out by Christmas too!) in Brighton, so I didn’t think I’d meet the cast at first. Then, when I was lucky enough to head to Disney studios in March, I met the incredible animators, as well as Dan & Swampy, who created the show and voice Dr Doofensmirtz & Major Monogram.   Richard O’Brien was nowhere to be seen sadly

The series offers a new song in every episode, and this week you get to provide it.  How did the song get done, was it one from the trunk, or something new and special for Disney? – There are two talented chaps who provide the songs for Phineas and Ferb- they sketched out lyric ideas and gave us the backing track, then Rob beefed up the Hip hop elements and I made the lyrics my own by adding singing fruit and mechanical cows.

Will you be releasing the song, or will it appear on a future P&F soundtrack? – I guess it might be on a P&F soundtrack, it’s Disney’s song now, so hopefully we’ll see it out again, along with the eventual Professor Elemental action figure, lunch boxes and assorted merchandise.

(And because it’s what I usually write about, I had to ask)

How do you plan to celebrate the Doctor Who anniversary next week?   Already celebrated it. Popped on my time travel trousers and went to next week just last week. It was (and will be) great.

More examples of the illustrious sir’s work may be found on his website, www.professorelemental.com