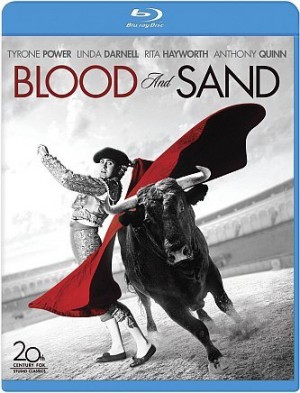 The Golden Age of Hollywood is filled with shining stars, brilliant directors and pioneering films that built a foundation for all to follow. As a result, films from those first decades are viewed with nostalgia and fondness, making us consider them all to be wonderful, especially the ones form the Big Name Stars. The magic of those early years was nicely captured by Martin Scorsese in Hugo and the bets of the best are restored and released on Blu-ray waiting to be rediscovered.

While we bemoan the justifiably bemoan the bloated nature of films, hoping they would be trimmed by 15-20 minutes and emphasis character over mindless action, we cite the classics in the field. And then come along older films that sound promising, look interesting and ultimately show they have not aged at all well. 20th Century Home Entertainment just released Tyrone Power’s Blood and Sand on Blu-ray and despite it being about a bullfighter, does not make you cry, “Ole!”

The 1941 release was shot in color and it is lovely to look at, earning Oscars for cinematographers Ernest Palmer and Ray Rennahan. Based on the 1909 novel by Vincente Blasco Ibanez, it tells the story of a cocksure son of a legendary bullfighter, determined to follow in his father’s footsteps. Sure enough he does, becoming the toast of Spain much to his mother’s regret, who has seen this all before. He marries Linda Darnell but falls for temptress Rita Hayworth. You pretty much know where this is all going since the script lays it all out like a series of tracks to carry the train.

Power’s Juan Gallardo leaves home as a promising teen and returns home a champion, ready for fame and stardom, He is at first mocked then loved then abandoned by the great matador critic Curro (Laird Cregar) who seems to represent the adoring and fickle public. As Gallardo’s star rises, he pays less attention to his craft, indulging in life’s luxuries and does everything to excess. Along the way, the illiterate never takes time to educate himself or pay attention to who handles his money, a situation exacerbated when he enters into the fiery affair.

One of the most interesting scenes in the film is when the two women meet and talk not fight, about the man they both love. It’s subtle and underplayed so is remarkable.

The stars are well supported with some terrific character actors early in their careers such as J. Carroll Nash (Man from U.N.C.L.E.) and the theatrical John Carradine. Accompanying Hayworth and sporting a cheesy Mandrake mustache is young George Reeves and he’s given precious little to do but cock an eyebrow at Power. 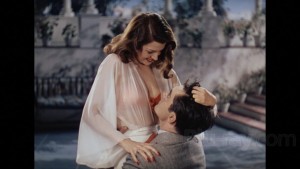 The bullfighting scenes are genuinely boring and you never are made to understand what makes Gallardo so special. And of course there’s one of his childhood friends who is now his rival, played with verve by Anthony Quinn. As The New York Times wrote during the film’s initial release, “In themselves they are good calendar art; as film drama they are as hopelessly static as Jo Sterling’s adaptation is puerile. Most of the fancy capework in Blood and Sand occurs in the script.

“For there is too little drama, too little blood and sand, in it. Instead the story constantly bogs down in the most atrocious romantic clichés, in an endless recital of proof that talented young bull-fighters are apt to become arrogant and successful; that Curro, the critic, will sing their praises, and that thereafter their love life becomes very complicated.”

Jo Swelring’s script is thin and given his credentials I expected far better. Director Rouben Mamoulian keeps the pacing deliberate and stretches things adding a dollop of heavy handed religious imagery. At 2:05, I wanted more story or a faster pace or something because this just plodded along, creaky in terms of dialogue and performance.

The film transfers wonderfully to high definition with good audio. The sole extra on the disc is a commentary from Richard Crudo, former President of the American Society of Cinematographers. His background and anecdotes are sometimes more interesting than the film itself.