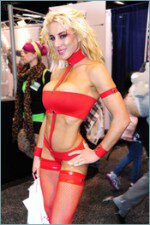 My colleague, Kate Kotler, has assembled a list of articles about the continuing harassment of women at comic book conventions and other gatherings of fans. I’m late to this party, but that’s because I’m conflicted.

And here’s my problem. I don’t really get this. Maybe for Halloween, I’ll pull something together for a party or to answer the door for trick-or-treaters. I have no desire to make costumes, nor to wear them around thousands of strangers.

Let me be clear. This is my problem. The people who cosplay are clearly enjoying themselves, and I have no desire to deprive them of that joy. If anything, it’s my loss that I can’t be less self-conscious when I’m out in public.

And some people think this is okay, because if those women didn’t want the attention, they wouldn’t wear costumes.

Because an admiring glance or a respectful compliment, the kind of attention the cosplayed might appreciate, is exactly the same as a guy who rubs his erection against you while describing how much he wants to rape you.

If there are other parts of modern life where men think this kind of behavior is acceptable, I do not know what they are. I would guess that, if they exist, they are other events where men consider women to be interlopers, invading their secret clubhouse, and this is how they let women know their place.

Comic book conventions contribute to this problem in the way they program. Although the female attendance at the recent New York show was estimated to be around forty percent (and looked like more than that from my unscientific observation of the floor), the guest list was less than two percent female. At the recent Harvey Awards in Baltimore, only one presenter was a woman, although Fiona Staple won a respectable percentage of the prizes. It would be easier for women to be taken seriously by convention goers if they were taken seriously be convention planners.

I don’t think we should sit back and wait for others to fix the problem. I think we need to fix it ourselves. Every time we see bad behavior, we should say something, loudly. Every time a convention or industry event ignores women, we should ridicule them for their lack of knowledge about our industry and its future.

This isn’t for my convenience. This is how we save the world. Women are not objects of prey. If, today, we tolerate sexual assault “because look how she’s dressed,” then, tomorrow, they can feel entitled to shop for us on the street, like groceries.

We’re better than that.