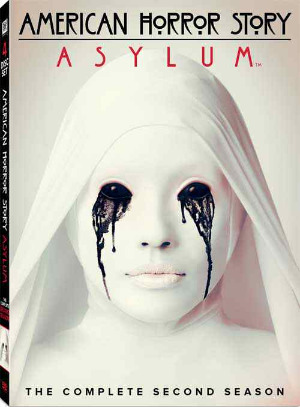 FX’s American Horror Story has helped change the way we consume terror tales on television. First of all, each season is self-contained and although some performers can be seen as different characters in each of the three seasons, they are entirely different stories. The limited nature of the premise allows the producers to nab major performers and it has worked with great success, judging by the Golden Globe and Emmy nominations it has been receiving. By having a strong story and an ensemble of repertory players, anchored by the amazing Jessica Lange, the series keeps you from ever getting bored.

With season three now airing, 20th Century Home Entertainment is releasing Asylum, the Complete Second Season. They share the umbrella title but have little to do with one another as Asylum focuses on the inhabitants of an institution for the criminally insane in 1964.  Cocreators Ryan Murphy and Brad Falchuk, this is closer in spirit to their Nip/Tuck for FX than their Glee for Fox. I appreciate their ability to not repeat themselves and keep things interesting and fresh.

Asylum was written around Lange and then others from the first season came back in roles written around her Sister Jude. Sarah Paulson, Evan Peters, Lily Rabe, Frances Conroy, Zachary Quinto, and Dylan McDermott are all back for the ride. If the first season watched a family unravel in the traditional haunted house, setting the second tale in an asylum just begs for dysfunction and terror. The Briarcliff Mental Institution in Massachusetts is set in an era when caring for the mental ill was some limbo realm where treatment was sporadic, attempts at rehabilitation was nonexistent and patient care was little better than inmates at a penitentiary.

The season explores 1964, the year after JFK was assassinated and the birth of modern day pop culture (cue The Beatles on Ed Sullivan) and the present day. As a result, it’s interesting to see how the characters react to things such as homosexuality and changing mores. The institution was packed and functioning back in the day and now stands empty, haunted by those who dwelled and worked in its halls. Lange is tortured and hides behind her habit, avoiding coming anywhere close to the stereotype created by Nurse Ratchet. Instead, she is avoiding her past, much as Arthur Arden (James Cromwell) does leaving people to wonder if he was a Nazi torturer. Similar to Parminder Nagra’s psychiatrist set in the past portions of the failed Alcatraz, Quinto’s Dr. Oliver Thredson arrives with “progressive” approaches to treatment which he wants to apply to a serial killer.

But it’s not all psychological horror as Frances Conroy returns, this time as the literal Angel of Death. Let’s not forget the extraterrestrials, too. Of the thirteen episodes, contained on three Blu-ray discs, there are several self-contained bits while other threads spread across the entire season with Lana (Sarah Paulson) as the through-line involving her relationship with Sister Jude.

The filming is shadowy, moody, atmospheric in fresh ways, refusing to repeat the first season’s visual flair. Thankfully, the transfer to high definition is handled well so the overall visuals are strong, accompanied with good audio.

For a show packed with as much detail as there is, the paltry selection of extras is disappointing. You have deleted scenes on two of the three discs and then four short pieces. The Orderly (9:00) wastes space with an orderly being interviewed by an unseen woman, ending with a shock. What Is American Horror Story: Asylum? (21:55) is a collection of interviews from cast and crew, likely pulled from press materials. More interesting is Welcome to Briarcliff Manor (15:04), letting us look at the impressive production design. Finally, there is a look at the make-up and prosthetic work done on The Creatures (14:49).