Mike Gold: Where Have All The Comics Gone? 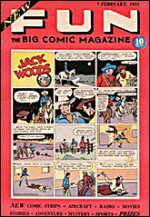 About a thousand years ago, I was on Steve King’s WGN radio show (now sorely missed) and somebody called in and asked about the name “Comic Book.” I was taken aback momentarily, trying to decide if I should go into my “we’ve kicked the kids out of the donut shop” auto-rant. Out of respect for Steve and his 33 state / five province reach, I did a short history instead.

I talked about how the original comics were simply reprints of newspaper strips, some funny (hence the term “funny books”), some were adventurous, and the best were surreal. Within a few years all the licenses were tied up – not just the good ones – and new publishers like Major Malcolm Wheeler-Nicholson had to hire young (read: inexpensive) writers and artists to create new stuff.

Funny comic books continued to dominate newsstand and subscription sales for the better part of two decades. Indeed, Dell Comics’ Walt Disney’s Comics and Stories sold over three million copies each month, the majority as subscriptions. Other movie cartoon stars did quite well, and before long we had a plethora of original funny animal and funny human comics, including Bob Montana’s Archie, Walt Kelly’s Pogo (yeah, the li’l possum and his alligator buddy got their start as a comic book feature), and Shelly Mayer’s Sugar and Spike.

In those hallowed days, comic books were only available on newsstands (stand-alones, in drug stores, transportation stations, etc.) and by subscription. There were no comic book stores. The concept was ridiculous: how could you make money only selling ten-cent product?

This is a question that haunted publishers in the late 1950s when the traditional outlets started to die off. Shopping malls replaced drug and candy stores and five-and-dimes (Woolworths, Kresges) were rendered redundant by convenience stores. Public transportation was severely reduced as people moved out of the inner-cities and into suburbs and outlying neighborhoods, necessitating the purchase of a car. You can’t read a comic book – or text, for that matter – while operating an automobile.

The medium survived, if you call this survival, by the creation of the direct sales marketing system wherein cockroach capitalist comic book stores could order new comics on a non-returnable basis. They received them about three weeks early, so those few remaining newsstands faced severe competition if they were located near a comics shop. Then again, those few remaining newsstands couldn’t care less: the amount of profit in a comic book wasn’t worth the effort of maintaining the racks.

Several comics retailers and at least one severely shortsighted comics distributor discouraged marketing towards children because “they didn’t have enough money and weren’t worth the bother.” Oh, yeah? Well, then, where are your new customers going to come from ten or twenty years down the road?

Well, twenty years down the road, comic book sales were a small fraction of what they had been and, as DC’s co-publisher recently quipped, “our average reader is about 50 years old.” (I paraphrase.) So, in effect, by cutting off the kids we’ve voluntarily placed ourselves in the position the mom’n’pops were in a generation ago. Worse, actually. Most kids know from comics characters not because of the comics, but because of the movies and television shows. They find comics confusing, boring and expensive – if they can find them at all.

As my fellow ComicMixer Marc Alan Fishman said last week, a few publishers are trying to correct this by establishing lines of kid-friendly titles. If they succeed, we’ll have a next generation of comic book readers.

If they fail, the American comic book will become part of our cultural history.

So here’s what you can do. Halloween is coming up. Many publishers have produced special digest-sized comics to give to trick-or-treaters, and that’s great. But if you can’t find them, there’s plenty of new kid’s comics out there. Buy a couple dozen and give them out instead of all that sugary candy stuff.

If you already bought all that sugary candy stuff, ship it to me. I’ve got plenty of comic books.

THURSDAY AFTERNOON: The Debut of Tweeks!