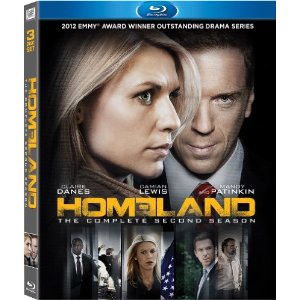 When last we checked in, former CIA Agent Carrie Mathison (Claire Danes) had figured out the truth regarding an attack in Washington, D.C. but no one took her seriously as events caused her bipolar self to meltdown, requiring hospitalization. Therefore, she is the only one to realize that something is serious amiss with Nicholas Brody (Damien Lewis), the recently returned POW who has actually been turned by Al Qaeda  bigwig Abu Nazir (Navid Negahban). Brody is poised to run for office, his wife unsuspecting, Vice President Walden (Jamey Sheridan) (the real target of all this) backing his run. Left to pick up the pieces is Saul (Mandy Patinkin), who is distracted by his wife’s departure for India, possibly taking their marriage with her.

Homeland’s inaugural season arrived with good buzz which grew in volume as audience’s glommed on to the show and Danes’ brave performance of a woman undergoing a total breakdown. It earned numerous nominations and awards at this past weekend’s Emmy awards and season three is ready to kick off. Thankfully, Season Two is now out in a handsome box set from 20th Century Home Entertainment. All dozen episodes are contained on three discs along with some bonus story material and a small number of extras.

Adapted from an Israeli series, Howard Gordon and Alex Gansa took full advantage of the adless premium cable opportunities and created taut hours of storytelling with rich characters and inter-relationships, anchored with an excellent cast. They moved things along at a nice clip and positioned all the pieces so the second season would move even faster. Carrie knows Brody more intimately than even his wife Jessica (Morena Baccarin), although his daughter Dana (Morgan Saylor) is rapidly coming to realize something is seriously off about dad.

We open months later with Carrie seemingly “normal” after ending last season with electroshock therapy, which gives Saul enough confidence to send her to Beirut when her former mentee has information she will only disclose to the former agent. Brody is in Congress, now receiving orders via Washington reporter Roya Hammid (Zuleikha Robinson), and still morally tortured over helping Nazir exact vengeance or be the perfect dad and all-American boy.

Things are nicely stirred although the trajectory of Brody from POW to hero to replacement Congressman to potential Veep candidate is way too fast and lacking the suitable background checks that any politician would do before committing (especially this early in a campaign). There’s also not really enough with Brody and Jessica compared with last season. All minor quibbles though compared with enormously entertaining episodes, well-written and strongly performed. Of course, the explosive concluding moments made us wait way too long for the next installment.

As one would expect, the video transfer to disc is fine both visually and aurally.  Scattered throughout the disc are episode specific Deleted Scenes and several bonus features starting with

Returning to the Homeland: Filming in Israel (7:52) showing how it doubled for Beirut and honoring its roots. On disc three there’s The Border: A Prologue to Season Three (1:40) which becomes moot in a matter of days. Of more interest is A Super 8 Film Diary by Damian Lewis (11:05) with a lighthearted look behind the camera. Wrapping things up is The Choice: The Making of the Season Finale (15:41) which is fascinating for those of us who love to understand the creation process.