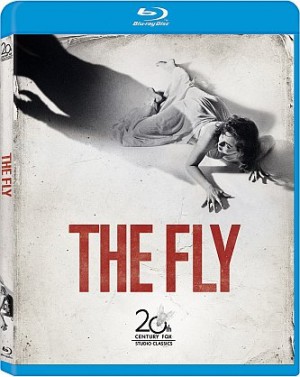 While growing up, I among the last generation that got to watch classic black and white and early color horror films day and night. Before talk and game shows became cheap fare, New York stations would run movies before dinner and throughout the evening. Some were cheesy, even to my pre-adolescent eyes, but others were just downright scary. Among the latter was the effectively creepy The Fly. 20th Century Home Entertainment has just released this beloved classic on Blu-ray and it has been nicely transferred to enthrall a new generation.

Of course, many of the readers here probably only know the fun and weird remake by David Cronenberg, which does nicely stand on its own, but the original is well worth a loo, too.

Released in 1958, it was one of Fox’s truly great horror/sci-fi offerings after decades of inferior efforts. The film is based on the forgotten George Langelaan short story of the same name which first appeared in the June 1957 edition of Playboy. Fox quickly snapped up the rights and assigned the script chores to Shogun’s James Clavell. Despite its brevity, he whittled away elements of the story and focused squarely on the doomed Andre (David Hedison, pre-Voyage to the Bottom of the Sea), a scientist cursed by his own lab work.

Told partly in flashback, the movie has Helene Delambre (Patricia Owens) recount how and why she killed her husband Andre as her confession to her brother- in- law Francois (Vincent Price) and Inspector Charas (Herbert Marshall). Essentially, Andre was building a transporter device and of course decided to test it on himself without any assistance or witnesses. As he stepped into the beam, an innocent fly also entered the streaming energy and, well, things happened.

There’s a sense of creeping menace as the film slowly unfolds its tale even though it somewhat telegraphs that clearly some body parts got mixed up. But it also builds up a nice sense of tension until the big reveal, when the cloth covering is removed and we see the giant fly head where Hedison’s handsome face should be. It’s a measured approach, letting things build without a lot of melodrama or screeching violins. We’re sold on believing this tale thanks to Owens’ strong performance with a nice turn from Price. Hedison is underrated here considering how much he has to do without speaking or having his face shown.

Of course, that’s saved for the great final shot, which horrified me as a kid and still brings backs strong memories.

Fox gets credits for the fine transfer of this CinemaScope classic, retaining some of the color and sprucing up the rest. The sound is similarly strong, letting the sound effects come through nicely. The new edition also comes with an interesting and amusing Commentary with Actor David Hedison and Film Historian David Del Valle. There’s a repeat of Biography: Vincent Price from 1997 (44:03); Fly Trap: Catching a Classic (11:30), which explores not only this but the two unnecessary sequels; Fox Movietone News (:54) recapping the film’s premiere in San Francisco; and, the original Theatrical Trailer (1:59)