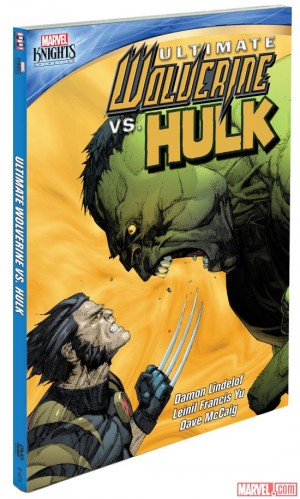 There was tremendous excitement over Lost’s Damon Lindelof making his Marvel debut with the Ultimate Wolverine vs. Ultimate Hulk miniseries. The writer, at the height of his popularity, was paired with Leinil Francis Yu so anticipation was running rampant. The first issue arrived and there, the behemoth literally tore the Canadian mutant in half – something we’d never seen before. The second issue ratcheted things up and then….nothing. At least not for threel years and by the time we got the final issues in 2009, few cared. The momentum and excitement was long gone and could not be recaptured.

Marvel Knights’ Motion Comics saw the potential here, and adapted the story into a multi-part serial totaling about 1:10 and for a change, did a good job casting well-matched vocal performers for the two lead roles.

The entire story is now collected on Shout! Factory’s release, Ultimate Wolverine vs. Hulk, this Tuesday. Picking up on previous threads, Bruce Banner and alter-ego was hiding out in Tibet letting the world think him dead. Instead, uber-suspicious Nick Fury knows better and hires Wolverine to go finish him off.

They talk, they fight, they dream and we get various cameos from the rest of the Ultimates universe. Perhaps the most significant event to come out of this fairly thin story was the introduction of Jennifer Walters, a scientist work on the Super-Soldier research and becoming that world’s She-Hulk.

Yu’s artwork is never short of gorgeous and he fits in nicely with the more realistic-looking Ultimates world, coupled with Dave McCaig’s excellent color art. Unfortunately, the Motion Comics approach does their work a disservice. If anything, the movements are jerkier than previous productions and the actions are stiff or off-kilter. The concept does a good job with special effects and transitions but when you’re asking two-dimension artwork to try and gain motion, things are limited. The entire concept of Motion Comics appears to have come and gone, especially with digital productions, such as Madefire’s offerings, introducing a new generation of animated fare.

The sole bonus feature is a 7:26 look back from Supervising Producer Kalia Cheng and Yu, which is interesting but far from informative.