Mike Gold: And This Is How The World Ends! 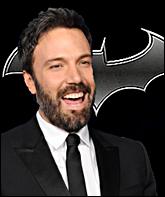 OMG! OMG! Did you hear who they’ve signed to play Batman in a whole bunch of movies, starting with Man of Steel 2? No, not Anthony Weiner. And not Ann Coulter –she’s already signed to play Nick Fury in the S.H.I.E.L.D. teevee series. No, Warner Bros. found somebody far worse. They hired the very personification of celluloid evil: Ben Affleck.

Yes, I’m sure you heard of this. So did literally tens of thousands of “fans” who were so upset they signed a petition condemning the action. And seemingly hundreds of thousands went to Facebook, to Twitter, hell some even reactivated their My Space accounts to express their extreme displeasure. Yea, verily, Ragnarök is upon us!

To quote the immortal William Shatner, get a life. You’re entitled to your opinion; if you don’t think Ben Affleck is a worthy actor, that’s your opinion. In my opinion, you’re wrong – Ben Affleck is a perfectly fine actor on his worst day. Besides, it doesn’t matter who’s inside the rubber suit. Lassie would look fine in the Batsuit, as long as she didn’t try to lick herself.

The question is, can the performer handle the role of Bruce Wayne? Quite frankly, this is not a tricky part to handle. Any handsome high school senior who did The Great Gatsby can do it. It’s hard to imagine Affleck turning in any less a performance than Michael Keaton – who I thought was fine – and a better performance than Keaton’s first two successors.

I realize it’s heresy to say this, but that’s never stopped me before: Christian Bale didn’t have all that much to do as Bruce Wayne. When he did, he was fine but nobody was wailing about his being cheated out of an Oscar (Registered Trademark, AMPAS, All Rights Reserved, Watch Yer Ass).

I’ll even defend the Daredevil movie. Ben Affleck wasn’t what was wrong with that movie, and, honestly, in my opinion it wasn’t a bad movie. We had come to expect better Marvel superhero movies, but it was better than both Hulks and either Fantastic Four. More important, the director’s cut was actually a good movie. Not Spider-Man 2 good, not The Dark Knight good, but a solidly entertaining movie with some fine performances. Direct your wrath at whomever cut the theatrical print.

Besides, Affleck can’t help but walk all over Henry Cavill. It’s the approach to Man of Steel 2 that concerns me. The first one was totally misguided. It wasn’t Superman. Actually, it was Batman.

I’ll say one thing for the hiring of Ben Affleck. It shows that Warner Bros. is willing to put their money where their, well, their sundry body parts are. Signing him to a multi-movie contract shows they’re in it for the long haul. It shows they understand what Robert Downey Jr. did for the Marvel movie universe.

And if there’s ever a Marvel/DC crossover movie – calm down; this is just a what-if – I can’t think of a more enjoyable pairing than Robert Downey Jr. and Ben Affleck.

Besides, we already know Bruce Wayne and Tony Stark sit on each other’s board of directors.