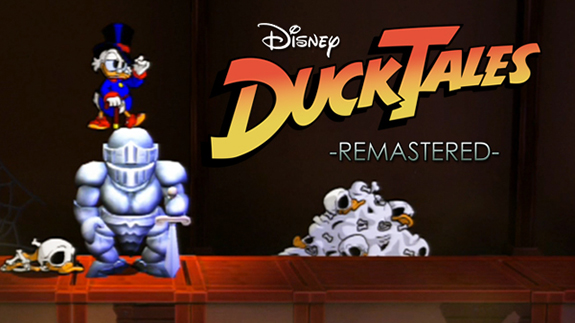 Duck Tales Remastered is out, and it is glorious perfection.

The original gameplay of the original Capcom NES classic (largely considered the finest platformer on the system) is reproduced perfectly.  Nothing has been “improved”, nor need it be.Yes, there are difficulty settings now, but if you want to reproduce the original in its infuriating awesomeness, it is there for you.

Note that I only said the gameplay had not been improved.  The rest has been catapulted into the 21st century by spectacular game developers WayForward, makers of the Mighty Switch Force series, and also just reinvigorated Shantae.  The graphics are still 2-D, but they are as sharp as the animation from the series, and thanks to the advances in technology, includes voiced narration and dialogue…by the original cast, wherever possible. Almost everyone is back; June Foray as Magica deSpell, Chuck McCann as Duckworth and half the Beagle Clan, and Frank Welker as the other half of the Beagle Boys,  Hal Smith, original voice of Flintheart Glomgold, passed some years back – voice and character actor Brian George has stepped in expertly, and Eric Bauza steps in for the late Hamilton Camp as Fenton Crackshell, AKA Gizmoduck.

And as for the hero of the game…I will not lie to you, once again hearing Alan Young as Scrooge McDuck brought tears to my eyes.  There have been others to voice the world’s richest duck, but none so often, and as long as the illustrious Mr. Young.  It’s a voice he’s used often, most famously in The Time Machine as various members of the Filby family.

I look forward to hours of maddeningly reliving the frustration of my…well, not quite my youth, more like my early married days.  I beat this thing one, I can do it again.