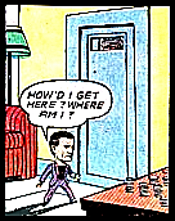 First, the bad news: According to Diamond Distributors, Marvel and DC combine to dominate about two-thirds of the total comic book hardcopy sales.

And now, the good news: According to Diamond Distributors, Marvel and DC combined possess only about two-thirds of the total comic book hardcopy sales.

Everybody else shares in that last third: Diamond, Image, Dark Horse, IDW, Archie, Boom and about, I dunno, maybe three thousand others. But they’ve achieved something that a decade ago would have daunted Sisyphus. Even at one-third of the market, these folks have torn down the wall. It wasn’t that long ago when DC and Marvel enjoyed a duopoly in excess of 80% of the market.

The really cool thing about this news is that these “other” publishers have succeeded by doing the types of comics that The Huge Two haven’t done successfully in decades. Dynamite’s line of pulp and pulp-inspired characters is exciting and largely of solid quality. Image brings to life the independent comics myth, often with material produced by some of The Huge Two’s top talent. Dark Horse and IDW have pulled a couple chapters out of the old Dell Comics textbook. Archie continues to let their renown characters grow and adapt to contemporary times; they don’t compete with Marvel, they cooperate with Glee. And Boom has the courage to industriously pursue the younger end of the market, establishing a desperately needed next generation for our medium.

Of course, timing is everything and the Little Guys are thriving as The Huge Two are pissing their readers off left and right. I believe the only Marvel Comic published in the past six months that didn’t feature Captain America, Wolverine and/or Iron Man was the Modeling With Millie Summer Spectacular… and somehow they manage to publish what seems like 75 monthlies with the word “Avengers” in the title that read exactly the same.

DC’s Few52 has become a dizzying game of musical chairs, with talent not being allowed to put any substantial creative investment in their work. Of course, we all read about Paul Pope being told by Co-Publisher Dan DiDio DC produces comics for 45 year olds, as though such a ridiculously narrow focus is the way things should be. Correct me if I’m wrong, but hasn’t DC launched 104 titles in the Few52 line over the past two years? It sure seems like it.

All this is great news for American comics readers. We have a greater diversity of material in the stores and available for e-books. Add the graphic novel publishers and we’re finally approaching the broad spectrum of material we’ve seen in Europe and Asia the past 70 years.

We’ve got a long way to go, but I’m finally beginning to feel as though the promise of the so-called independent comics movement that started in the early 1980s is finally planting some roots. Maybe this whole thing has a future after all.

(A tip of the brainpan to my pal JimWiz for inadvertently supplying the art.)