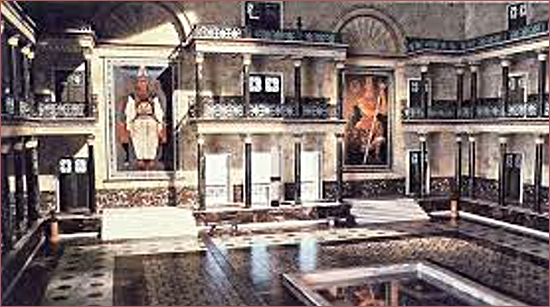 Do you have to do much business travel? I tend to go for long periods without it, and then have to do a whole bunch. It can be fun, but it’s also, you know, business. I’m staying in a strange place, seeing people I don’t see at home, eating foods I don’t usually eat at hours when I’m not usually eating. And, unlike when I’m working at home, I have to keep my pants on when I do it.

And then there is staying in hotels. The good parts: I don’t have to clean up after myself, I can try new shampoos, and if I get a king-size bed, it’s so big it’s like sleeping on the ocean. The bad parts: no kitty, the towels aren’t big enough, and there is nothing to read that I haven’t brought myself. Also, even with a big bed and a gigantic bathroom, I can feel closed in after a while.

So I was delighted to read in The New York Times that a variety of hotels, from highfalutin’ boutique inns to affordable chains, have added libraries to their list of amenities.

It would be nice to say that the hospitality industry has decided to encourage reading for the sake of the public good, to improve the literacy of the American traveling class. However, as the article states, the purpose of the library is to encourage customers to spend more time in the hotel’s lobby and bars, buying food and drink. At the same time, some of the hotels are making deals directly with publishers to promote their titles, even allowing customers to take the books home and return them during their next stay.

This is an incredible opportunity for comics. And by comics, I mean graphic novels.

If I’m in the lobby of a hotel looking for something to read, the most likely reason is that I’m tired, and I want something to occupy my attention while I’m eating or having a drink. I travel with my Kindle, but maybe I don’t have the attention span to stare at words (usually because I’ve been staring at words for hours already). A self-contained graphic novel, with a whole story, can engage my imagination without causing eye-strain.

In general, I don’t want to start up a conversation with strangers when I go to a hotel bar or restaurant. However, if I was so inclined, a graphic novel is a much better ice-breaker than a prose book. It’s easier to point to an image in a conversation than to read a narrative description. And it’s easier to share a book with a spline than a pamphlet.

It’s also easier to find an audience for books with spines. A businessman (or woman) enjoying some downtime might not want to read about a guy in spandex, but might get a kick out of the source of that new movie he’s heard so much about.

To my mind, the best publisher with whom to make a deal is Abrams Comic Arts. A bar where people are talking about Mars Attacks, My Friend Dahmer and The Carter Family is a fun place to be.

If I was managing a hotel near the Baltimore Convention Center, I would be checking this out.