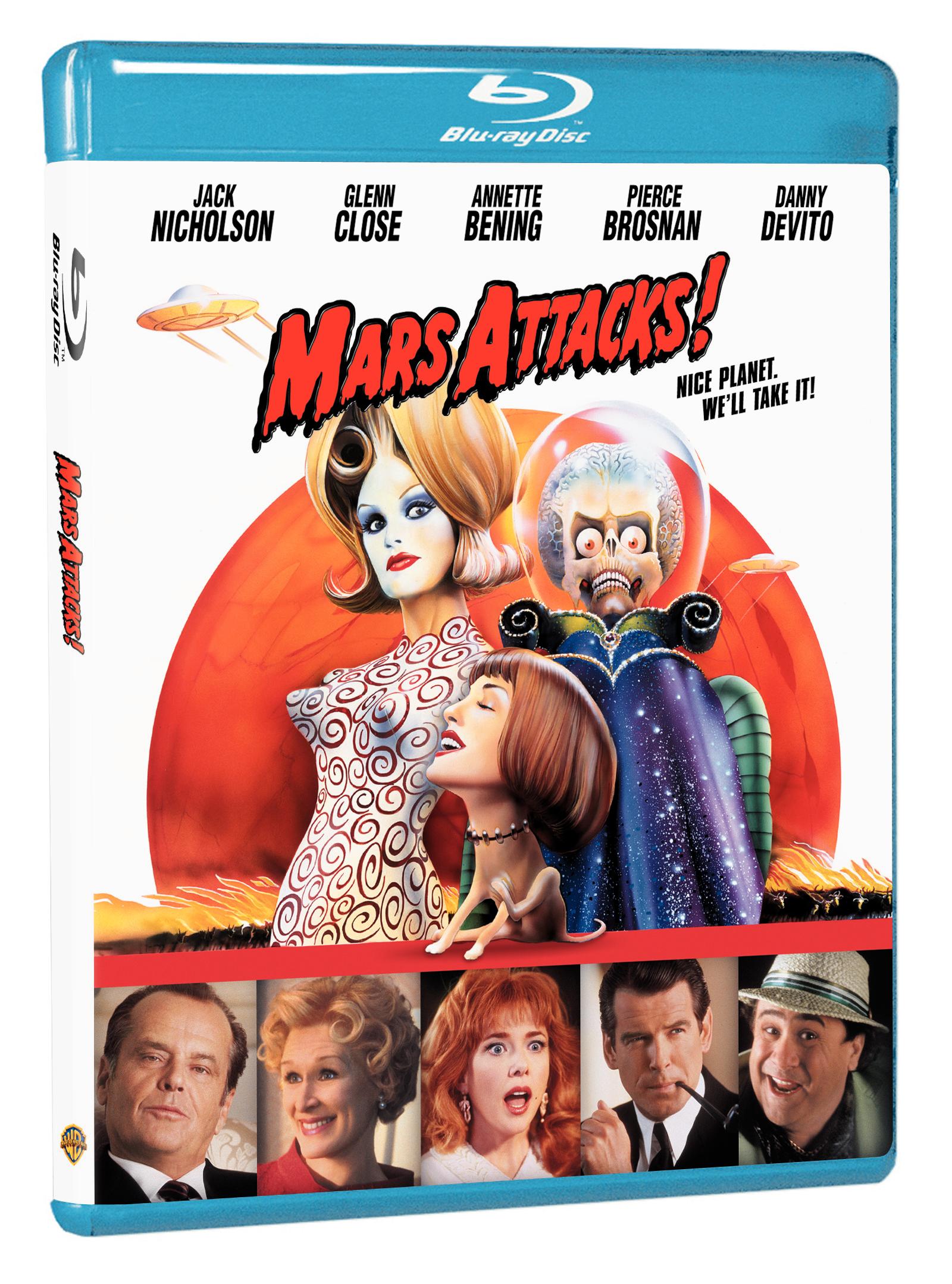 I was too young to buy the 1962 Topps trading card series, [[[Mars Attacks]]], and grew up hearing about these wonderful cards and was delighted when a facsimile edition was released in the 1990s. Others, though, were clearly inspired by them and when he was in a position to do pretty much whatever he wanted, director Tim Burton said he wanted to use the cards for a loving tribute to the goofy SF movies of the 1950s.

He turned to Jonathan Gems to write the story and then the first screenplay but as 1993 turned to 1994, it was clear he wasn’t delivering what the visionary director wanted. Instead, he gave the assignment to Scott Alexander and Larry Karaszewski, who gave him a sprawling story set in Washington and Las Vegas, giving a meaty part to the President of the United States so Burton could attract some big name talent. And the cast is stuffed with wonderful performers in parts great and small including Jack Nicholson (as the Prez), Glenn Close, Annette Bening, Pierce Brosnan, Danny DeVito, Martin Short, Sarah Jessica Parker, Natalie Portman, Rod Steiger, Michael J. Fox, Lukas Haas, Jim Brown, Tom Jones, Jack Black, Sylvia Sydney, Paul Winfield, and Pam Grier.

Part of the film’s fun turned out to be watching these celebrities get blown to bits by the aliens as their invasion of Earth continued unimpeded.

Costing a then-eye-popping $80 million, Warner Bros. heavily promoted the feature but it opened to decidedly mixed reviews and very poor box office. When I went to see it with a select group of pals, I loved it. Of course, I was the prime audience and “got it” while others couldn’t fathom the satirical aspects or homages to many other cheesy productions. The film became one of the first released by Warner on DVD and finally, this week; it comes out on blu-ray.

Rewatching the escapades works better on the smaller screen and the
cleaned up transfer makes ditching the original DVD worthwhile. Danny
Elfman’s score coupled with the tongue-in-cheek performances and wacky
alien make-ups makes this a great deal of fun.

Burton is known for darker imagery such as [[[Batman]]] or[[[ Edward Scissorhands]]] but this was the first bright film since his smashing debut on [[[Pee-Wee’s Big Adventure]]], followed by [[[Charlie and the Chocolate Factory]]] and, most recently, [[[ Alice in Wonderland]]].
In all cases, though, he does not repeat himself and brings his
visionary eye to the subject matter and finds a way to make something
new. The 55 trading cards were one-dimensional paintings by Norm
Saunders based on drawings from Wally Wood and Bob Powell, were more
than enough to show Burton how the aliens looked, acted, and their
weaponry. These were all faithfully replicated and then some with
Burton’s desire to match the cheap and technologically-limited special
effects seen in the movies this one sends up.

The problem for
audiences may be in the script which felt all surface and lacked
emotional depth with everyone playing things just a bit over the top.
The military seemed pumped up versions of the crew from Doctor
Strangelove (although there could be far worse sources of inspiration)
and the rest of the characters were all greedy, smarmy, flighty or other
clichés. We needed one real standout character and we were robbed of
that focal point. Burton cast his then-lover Lisa Marie as the fluid yet
oddly moving Martian infiltrator, which was more distracting than
plot-building.

Still, the actors were having fun and it showed
while ILM’s visual effects were terrific and Peter Suschitzky’s
cinematography was colorful. These all look better thanks to the video
upgrade which is good but should have been great.

There are no extras on the disc but the movie remains worth watching at least once.