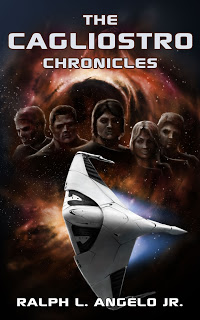 About The Cagliostro Chronicles:
In the year 2089 man’s first faster than light space flight is about to begin, but where it ends will be filled with action, adventure and the unknown! The Cagliostro is an experimental space craft which is destined to begin mans first faster than light voyage beyond his solar system and into a greater universe filled with dangerous adversaries, intrigue and a deadly conspiracy set to tear humanity apart! Join Mark Johnson and his crew of adventurers as they travel beyond our wildest dreams and into a universe fraught with mystery and danger!

Is now available in paperback here and for Kindle here.