So this is the story told in the Florida courtroom.

George Zimmerman looks out his window. He sees Treyvon Martin walking down the block. Zimmerman picks up his gun, goes outside, gets in his car, and hunts Martin down. Zimmerman finds Martin and confronts him. Martin is carrying a dangerous bag of Skittles. The two men get into an altercation. Zimmerman shoots Martin dead. Zimmerman tells the police that Treyvon Martin started the altercation and that he, Zimmerman, was “standing his ground.”

Can you pick out what is wrong in the story?* 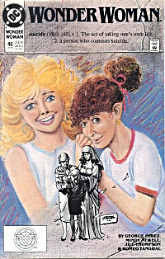 As I was saying…

I started to regret ever taking on the whole assignment. I felt I was turning out crap. I was embarrassed. I was sad. I worried about my future as a comics writer. And finally…

I will never forget the day it happened. I was arguing with Alan. And something in me simply exploded…

I slammed the door as I left. I walked out to the elevator. I pushed the button. I was fuming. I couldn’t wait to get out of there.

I was done. But Marv (Wolfman) had followed me out to the lobby and there he talked me down, convincing me to keep going, not to quit. He walked me back to the office, and I apologized to editor Alan Gold, and he apologized to me. (And by the way, Alan is a terrific guy, and he and I got along beautifully when we weren’t discussing Wonder Woman.)

So I finished the run. If you can’t remember that far back, the series was ending to prepare the way for George Pérez’s relaunch, and I was responsible for only the last three or four issues. But to be honest, I don’t think I would have stayed on with Alan as the editor, despite our personal friendship, even if the series had continued. I think I would have been fired. Lesson here, boys and girls: never curse out your editor in a loud voice that can be heard everywhere and starts the office talking. Or simply, never curse out your boss. These days I would still want to yell and curse and scream, but I’m a little bit wiser and a whole lot older (not just chronologically) – meaning more mature (?) – and I would try to find a solution that worked for both my editor and myself. Or, if that didn’t work, take myself off the book.

So I was done with Diana.

Wonder Woman had been rebooted in 1987. Not many people remember that Greg Potter was the original writer/scripter, by the way, with George co-plotting and penciling. But Greg dropped out after the release of Wonder Woman #2, and George became the plotter, with Len Wein writing the scripts until issue #18, when George took over the whole shebang.

This post-Crisis reboot was the one that did it for me. As I’ve stated previously, I have always loved Greek mythology, and my favorite stories about Diana were those involving the Amazons and their gods. Apparently, George and Greg appreciated the rich background, too. The inclusion of the Hellenic mythos and theology of gods and goddesses with supernatural powers but all too human personalities and foibles finally imbued Diana with her own raison d’être that brimmed with a new truthfulness for the character.

Responding to the heartache and prayers of Hippolyta, queen of the Amazons, who had led her followers to an island shielded in the mists from the patriarchal and brutal world in which they lived, (as the Isle of Avalon is in Marion Zimmer Bradley’s The Mists Of Avalon), the goddesses instructed Hippolyta to shape a baby girl out of the earth, and breathed the “gift of life” into the clay. (Hmm…in Jewish lore this makes Diana a golem. A golem is a figure made of clay upon whose forehead the Hebrew letters aleph, mem, and tav are written out to spell emet, which means “truth,” and doesn’t Diana have a golden lariat that forces those bound by it to speak truth? Boy, could I run with that one!)

The child was given the gift of beauty and compassion by Aphrodite, the Goddess of Love; the gift of wisdom from Athena; the power and strength of the earth from Demeter; the creativity, passion, authority, and energy of fire from Hestia, Goddess of the Hearth; and from Artemis, the Huntress, respect for all life and a mastery of weapons. Only Hermes, of all the male gods, bestowed a gift upon Diana – that of speed and the power of flight.

This Diana, though once grown a great warrior and unafraid to use force when necessary, was also a “stranger in a strange land” – not only an innocent in the ways of the world, but unable even to speak English when she first arrived here as an ambassador (or emissary) from Themiscrya.

Even the supporting characters made sense. Steve Trevor was still in the Air Force, but he was older and involved with Etta Candy, who was also more mature and with a realistic physique for her age. And Diana’s mentor in Patriarch’s World, a.k.a. Man’s World, was one Julia Kapatelis, an archaeologist and scholar of the ancient Greek world, who recognized Diana’s speech as a variant of early Greek, and who had a daughter, Vanessa, just about to enter her crazy ‘teens.

Working on this Wonder Woman with George and Karen was absolutely sublime. He was doing the plots, but it was definitely a partnership; and all the characters were so real, so defined – they were easy to write because I knew just what each one would say in whatever situation they found themselves.

The highlight of our work together, im-no-so-ho, was Wonder Woman #46, “Chalk Drawings.” It was ostensibly about Lucy’s suicide, but George and I decided to not focus on Lucy herself; instead, it was about the aftermath of Lucy’s final action. No one knew why Lucy had killed herself; everyone searched for an answer; everyone blamed him or herself. Even Diana, who went home to seek solace from her mother, only to learn from Hippolyta that even an Amazon is capable of committing suicide; even an Amazon cannot always find the answer or the way to help. And with the beautiful artwork of Jill Thompson and Romeo Tanghal, I believe it deserves to be a classic.

On a personal level, having had to deal with clinical depression throughout almost my entire adult life – it wasn’t properly diagnosed until my mid-30’s, btw, and don’t ever try to tell me antidepressants, especially the SSRI class, is more dangerous than the disease, because I will bite your face off – that issue was very special to me, and really emphasized what Wonder Woman, the hero made of clay, the golem, stands for…