Get Your Name in the Scarlet Jaguar by Win Scott Eckert! But Hurry!

Thursday July 11th is the deadline to order the The Scarlet Jaguar by Win Scott Eckert, and have your name appear in the book on the acknowledgments page. Baring a mass of last minute orders, this book will be a Signed Limited Edition of only 225 copies! 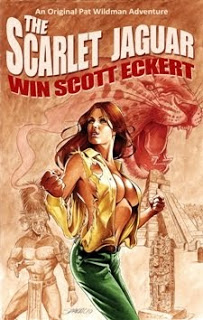 The Scarlet Jaguar will be released at FarmerCon VIII (held in conjunction with PulpFest, July 25 – 28) and there is no telling how many copies, if any, will be left after that weekend.
When we last saw Patricia Wildman, daughter of Doc Wildman, the bronze champion of justice, six months had passed since the main events of The Evil in Pemberley House. She and her associate Parker, an ex-Scotland Yard Inspector, had set up Empire State Investigations at her Pemberley House estate—and she just received a mysterious phone call from her supposedly late father . . .
Several months later, Pat receives a visitor, a young girl named Emma Ponsonby, whose father, a British diplomat to a small Central American country, has been kidnapped by the Scarlet Jaguar. Pat, following in her father’s footsteps of righting wrongs and assisting those in need, agrees to help, but before they can set off on their quest the Scarlet Jaguar sends a gruesome warning.
Undeterred, the investigation takes Pat, Parker, and their young charge from Pemberley House in the Derbyshire countryside . . . To New York, where they battle agents of the Scarlet Jaguar and meet Pat’s old friend, the icy, pale-skinned beauty Helen Benson, who agrees to join them on their quest . . . To the small nation of Xibum, where the Scarlet Jaguar’s reign of uncanny assassinations threatens to expand to the rest of Central America—and beyond!
Now, it’s a race against time deep in the wilds of the Central American jungle, as Pat Wildman and her crew search for Emma’s father, and confront the Scarlet Jaguar’s weird power to eliminate his enemies from afar, marked only by a wisp of crimson smoke—smoke resembling nothing so much as the head of a blood-red screaming jaguar. But who—or what—is the Scarlet Jaguar? A power-mad dictator determined to reclaim power? A revolutionary movement bent on taking over the country, and the rest of Central America?
Or a front for something even more sinister . . .?
http://meteorhousepress.com/the-scarlet-jaguar/
Share