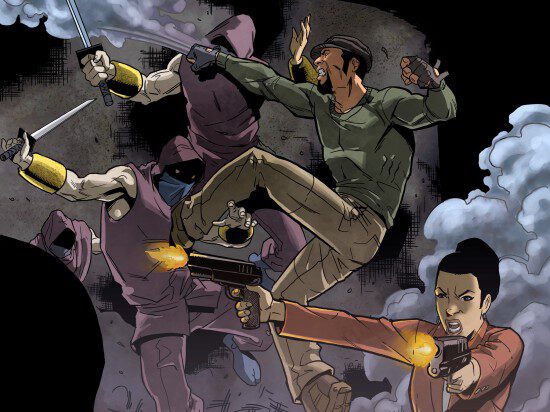 Prodigal, the globe-spanning tale of a team of fortune-hunters living on the edge of danger from writer Geoffrey Thorne and artist Todd Harris, debuted today on Thrillbent.com.

Todd Harris is an accomplished artist for both comics and storyboards.  His credits include: X Men Origins: Wolverine, God of War II & III, In Time, Halo 4: Forward Unto Dawn, and Thrillbent’s own Arcanum.

Geoff was kind enough to take the time to answer a few questions for us.

ComicMix: Give us the Don-LaFontaine-movie-trailer speech for Prodigal. “In a world…”

Geoffrey Thorne: “In a world where psychotics and murderers are accepted as legitimate heroes, two creative professionals decided to reject that paradigm and put a little fun back into the comic book multiverse.”

GT: Prodigal is the nickname of Byron Lennox, one half of J & L Retrievals. He got it a long time before becoming a retrieval specialist because, for some reason, no matter what befell him on a mission, he always came back. Sometimes he’d be the only one to come back.

CM: How did they decide who got top billing?

CM: Play out a little bit of Prodigal for us. Where are we starting from?

GT: The beginning of a case, the middle of Byron and Pae’s lives. We only tell the stories of the cases that go sideways in the middle. We only tell you as much as you need to know to keep up with the story.  another thing over which we’re not overly fond is ridiculously long and ponderous continuity chains. Everything you need to know is in the story you’re reading. No tricks, no zingers. Just straight-up fun.

CM: Why are these people doing it? Is it literally just the paycheck for them, or is there something else going on?

GT: Thrills. Money.Freedom. Beats the hell out of fighting Galactus.

CM: Isn’t Arcanum supposed to be running on Mondays on Thrillbent? For that matter, isn’t Todd Harris the artist on Arcanum? Have you stuffed John Rogers into a school locker and taken his pencils?

GT: Well. Yes, except it’s on hiatus. Anyone who tries to stuff John into anything is welcome to the butt whipping that will ensue. John can handle himself and so can his many friends.

CM: What’s it been like working with Todd Harris on the art?

GT: Working with Todd has been the most fun I’ve had creatively.

CM: What’s it like working for Thrillbent? What are the advantages, for you, of working for them?

GT: The advantages are… 100% ownership of our IP, a creator-friendly contract that must be read to be embraced an editorial and publishing team who really know what they’re doing. Plus, the founders of the company are not only writers, but fantastic ones. Working with them and the rest of the team, thus far, has been pretty damned awesome.

CM: How has your storytelling changed in writing for the sort of comics format that Thrillbent has?

GT: Hmmm. Not as much as you’d think. Mainly this format gives us better control of the tempo. Beyond that, it’s pretty much business-as-usual.

CM: You’re a loooongtime comics fan. How big was your collection, and how bad was your weekly habit?

GT: At its height my collection numbered in excess of 65,000. At my worst, and this was when comics cost a LOT less than they do now (and I was a lot richer), I was probably dropping between 60 and 100 bucks a week, depending on what was happening in “indie world.”

Lucky for you folks, Prodigal will be presented for free for the foreseeable future.

So what are you waiting for? Go read it!