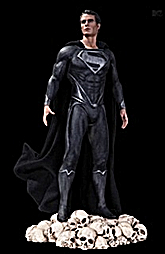 Forgive me, but I have to write about Man of Steel some more. Or, more specifically, the current marketing of Superman.

Last week, I wrote about how disappointed I was in the apparent shame felt by comics fans and Warner Bros. about Superman’s optimism.

But it’s not just that this kind of grim’n’gritty Superman is disturbing. There is also the character’s complete disregard for the welfare of the people of Earth. As a New Yorker who lives within a mile of the World Trade Center, I tend to get upset by such images of destruction. I don’t expect filmmakers to contort themselves to my memories. In fact, I can appreciate the opportunity for catharsis.

However, I would like to see some acknowledgement that there were humans living in a city that is ravaged by superhuman destruction, and these humans were affected by the smashing skyscrapers. Joss Whedon managed to do this very well in The Avengers. I am disappointed that we don’t see at least as much in Man of Steel.

New this week is DC choosing to emphasize the worst aspects of the Man of Steel Superman with this San Diego Comic-Con exclusive, a sculpture of Kal-El standing on top of a pile of skulls.

This image exists in the movie, in a nightmare. That’s the most I can say for it.

If you don’t like hopeful characters, then Superman is not for you. Don’t try to mutate Superman into something he is not, just to fit the fashion.

I’m not the only person who thought so, as you can see here and here. Even movie stars are questioning certain entertainment choices (although, for the record, I really enjoy Kick-Ass in all its iterations, and most of what Mark Millar does. YMMV).

Believe me, I understand. There is a time in the lives of most of us, usually when we are around 12 or so, when we understand that there is more to life than toys and candy, that death and destruction exist, and we strive to be mature adults who embrace reality. For me, this state lasted through college. Then, when I lived on my own and began to experience my personal share of tragedy, I grasped the value of balancing realism with optimism. I loved Jonathan Richman not only for his talent and charm, but for his fierce defense of joy.

So, if I needed to have a ceramic expression of my own aesthetic, I’d buy this instead of a Superman on skulls. There has been enough death in my life . It needs more joy.

Joy is worth fighting for. That’s why I love Superman.