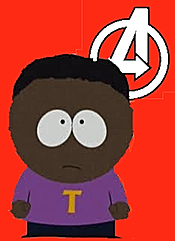 From the moment the Black Avengers was announced I’ve been asked over and over again what I think.

I think a few things…

I think anytime there is a serious attempt to bring not just African American but any minority characters to the forefront is a good thing. I pitched a project a year ago and was told a black super team would never sell in Hollywood, so what’s the point in even doing the comic book?

I think I’d better not tell you what I wrote and then discarded about the person who said that. Give that a thought – me thinking I’d better not say something.

I think (well, I know) I really like Axel Alonzo and what he’s doing with Marvel. Let’s face it, a young black child who see a Marvel logo on a black superhero book is going to lose his or her little mind.

After the Black Avengers, can the Malcolm X-Men be far behind?

I think it almost makes up for Mark Millar’s black character, Tyrone Cash. A black scientist who, when he gains superpowers decides to give up the whole scientist thing and become a drug-dealing thug.

Yeah, I was pretty rough on Mark last week and again this week but that’s nothing compared to what I have in store at my annual standing room only Black Panel at the San Diego Comic Con.

I think what’s sure to be a hot topic on the web especially among black creators is rather or not just black creators should be the teams on the project.

No. I don’t think just black creators should do the Black Avengers.

However, if Mark Millar writes a story arc and Tyrone Cash shows up that would be the quickest way to destroy what looks like a noble undertaking on Marvel’s part. The smart play would be to have Mark write a story arc and deal with that horrible black scientist who gains superpowers and becomes a thug drug dealer.

No, I’m not kidding.

Yes, there are black thug drug dealers in the world (there is one due at my house in an hour… heh) but a scientist who gain superpowers and becomes a fucking drug dealing thug?

That kind of characterization would kill all the good Marvel’s doing with this project.

Lastly, Marvel said they wanted to do something like Dwayne McDuffie would do. Would do? Dwayne, Denys Cowan, Derek Dingle and myself did do it. In fact, the San Diego Comic Con is celebrating the 20-year anniversary of us doing it.

Yo, Marvel, you better recognize.