The Kalamazoo Kid Arrives in Paperback 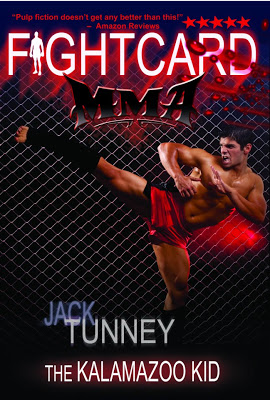 Fight Card Books has released The Kalamazoo Kid, a Fight Card MMA Novel, in paperback to accompany the ebook release.

Ray Kurt was one of the first guys to step into a sanctioned MMA fight – back when you scrapped four times a night and didn’t wrap your hands until you got to the hospital afterward. Now he trains fighters in his Kalamazoo mixed martial arts gym, searching for someone he can take to the top.

For Detroit and Chicago it’s all about turf, but for Kurt and Tallis their lives and redemption are balanced on a razor’s edge. Kurt is used to fighting with few rules, but now there is only one – survive…