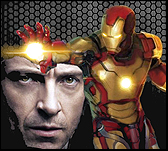 Well, this weekend Iron Man 3 opens here in the States after having conquered the world. (BTW, when did this become the norm? It used to be a film opened here in the US of A and then around the globe. Is the American market now the secondary market?) What started in one medium – comics – has become big in another.

There certainly are lots of reasons behind it, a principle one being less risk. Comics make great fodder for movies because they are relatively a cheap way of testing and ironing out concepts and stories compared to movies. The risk is lessened and if the product (as with John Carter) bombs, at least the executive who approved it can show it was not an unreasonable risk – in theory. Something new? From scratch? Not with our hundred million, buddy! So having a proven commodity in some form makes it a safer, surer, bet. In theory.

There’s lots of different sources – books, games, amusement park rides, television, even the theater. Joss Whedon’s follow up to The Avengers last year? Shakespeare’s Much Ado About Nothing. Why? Because he’s Joss Goddam Whedon and The Avengers made bazillions of dollars which means that for his next movie he gets to do whatever the hell he wants… at least until the box office receipts on that comes in.

The problem is – not everything translates well. I recently finally saw the movie version of the musical Les Miserables which in itself is an adaptation of the novel by Victor Hugo. I’m a fan of the musical, having seen it several times on stage, so I looked forward to the movie.

I was… whelmed. I enjoyed it and I have a DVD of it (yes, I need to move up to Blu-Ray or whatever else is coming) and I’m sure I’ll watch it again several times. Hugh Jackman was fine in the lead and, in a year that didn’t have Daniel Day Lewis owning the Oscar for his performance in Lincoln (adapted in part from Doris Kearns Goodwin biography, Team of Rivals) would have gotten him the Oscar as Best Actor. Anne Hathaway did score a Supporting Actress Oscar for her work as Fantine. However, there were several miscastings. Javert – the antagonist-  should be intense, driven, formidable and ultimately tragic and Russell Crowe was none of those things. He was doughy. He was there.

Crowe was Oscar material compared to Sacha Baron Cohen who played Thénardier, the innkeeper. The character is a louse, a con man, a parasite but in every production I’ve seen, he (along with his wife, played in the film by Helena Bonham Carter, also badly cast) brings down the house in his songs. The character should be charming, a rogue, and funny and Cohen was none of that.

What really unsold the movie to me was the direction by Tom Hooper. Prosaic, uninspired, functional – it served its purpose, it got the basic job done, but I found no “wow” in it and the theater always gave me “wow.” The stage productions always swept me along; the movie version plodded.

That brings me to my central argument – maybe it couldn’t. Movies are often very literal. Les Mis on stage works because of its theatricality. Stage makes great use of suggestion, illusion, metaphor. It engages the imagination, makes you see what may not be there, makes you a partner in the production whereas movies have to show you and you become an observer. What was magical becomes pedestrian.

I’m not sure that something that begins as a stage musical ever translates well into film. Yes, Chicago was an exception but it found cinema versions to create a heightened reality that mimicked the stage production. It wasn’t a translation; it was a re-invention for the cinema – which Les Mis was not. Musicals that are created for movies fare far better, Wizard of Oz being a superb example.

Comics also work like musicals. The imagination must be engaged to fill in what happens in the gutters, in between the panels. The movies made from comics succeed when they re-invent them for the movies.  I don’t need them to adapt a specific storyline; they are most successful when they are true to the concepts but re-imagine them for the films.

That’s why Iron Man 3 succeeds and Les Mis just lies there. Apples into oranges, my friends.