Marc Alan Fishman: Wrestling Is Fake; Comics Are Too 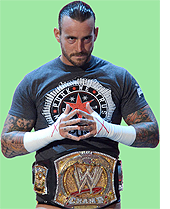 OK, I admit it: I’m a pro-wrestling fan. I’ll even do you one better. I’m a smart-mark. Yeah, I’m not only a fan, I’m a fan of the business behind the product. I know the difference between an Irish whip, a German suplex, and an inverted front face buster into a crossbar arm-breaker. I’ve tried hard to bury this part of my nerd-quilt for a very long time. Almost six years. But here on the precipice of Wrestlemania, I find myself DVR’ing episodes and instigating debates with fellow fans. There is no denying, kiddos. Pin my shoulders to the mat. I’m not kicking out of this one.

Like most fans of the sport (and yeah, I use the term loosely), I was introduced to it while I was but a wee one. My father, devoid of any other real hobby or vice, would every-so-often bring home a taped pay-per-view from a friend or co-worker. And I would be allowed, even on a school night, to stay up and watch it to the end. It led me to watch the Saturday morning recap shows (as we didn’t have cable back then). It led me when I got the Internet, to seek message boards, news groups, and the like. When I got to college (and got cable), it was a twice a week obsession. The real question of course being simple: after the ‘nostalgia was gone well into my teen years, what kept me a fan? The sport and the business.

Behind the scenes, wrestling is a fascinating machine. Bookers and top-brass give shots to up and coming talent, challenging them to connect with fans. The talent themselves, having spent years on the road honing their craft (both being able to perform the moves, and project a character), are tasked with becoming stars and elevating the company that gave them the chance in the first place. Merchandise is made, and product is eternally analyzed. The art itself isn’t just on a TV screen, or a bingo hall… it’s in a board room, and in the locker rooms; where creative minds meet all for the sake of entertaining the niche-market built specifically around itself. Sounds familiar, doesn’t it?

Look down on it all you want, but for the money, pro-wrestling is a living breathing comic book presented for the masses every week. Hulking super men and woman battle one-another endlessly. They become heroes, turn villainous, unite to stop larger threats, and every couple years things reset. Some stories are played for high drama while others are strictly slapstick. Continuity is cited, forgotten, and brought back into the fold when it serves a higher purpose. Vintage characters come back for cheap applause and shock value. Most people hold the independent presentations to be “better, and closer to what the medium should be.” And my favorite similarity? Every smart fan thinks he knows what’s going to happen; and that he could write it better if someone would just listen.

That sounds awfully familiar, doesn’t it?

And how about I cite a little topical note to boot! This past week, we all saw DC implode just a little as the curtain drew back and spat out several creators running for the hills due to creative differences. Back in 2011, angered over his own creative differences with his contract and character, CM Punk walked out to the stage and took over the last few minutes of the weekly WWF show Raw. He proceeded to air his grievances about the business, and broke the 4th wall like it was made of paper.

Now, this could all have been a work (fake…) but it was treated just like Gail Simone’s exit off of Batgirl. Of course Gail bowed out gracefully, didn’t complain at all, and was genuinely amazing about the whole ordeal. Punk was a heel (a villain), so why not be a big baby about all of it, right? At the end of the day: Punk got the spotlight like he’d always wanted. Gail Simone is back on Batgirl. And as I type this, I’m betting dollars to maple-glazed bacon donuts… that DC editorial is saving the life of John Stewart.

Suffice to say I’m finding a way to let my freak flag fly again. Wrestling may very well be scripted, but so are my favorite comics. And just like a great moment in comics like Otto Octavious successfully taking over Peter Parker’s body, so too can I enjoy John Cena using a never-seen before hurricanrana in his repertoire in order to defeat his opponent and earn his title shot at the big pay-per-view. It’s serialized story telling, in either form. Replace super powers with inhuman tolerance for pain. Replace indulgent caption boxes and exposition dumps for long-winded promos littered with catch phrases. Don the t-shirts, and attend the conventions. Hell, if you think you can do better… maybe start doing it on your own, and sell your product in your backyard.

Wait, scratch that. Kids: don’t become backyard wrestlers. Or indie comic creators. You’ll end up on your back either way.

And for any of my smart-marks out there: I’m pulling for Punk to beat the streak. It won’t happen of course, but if he can destroy the Undertaker’s Urn after losing the match, he’ll keep all the heat, and it’ll give Taker and Punk one more match next month.

And for any of my comic-insiders out there: I’m personally hoping Otto dials back the megalomania just a skosh, and Slott keeps him under the mask for at least a year. And when it comes time to put Peter back in the drivers seat… Otto either gets a young new body or yields to death’s embrace for the greater good.