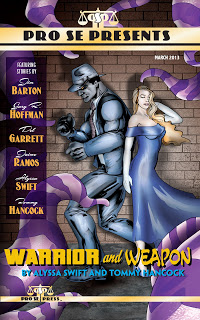 The Latest Issue of Pro Se Presents is now available as an Ebook!
The March 2013 issue of this two time award winning magazine comes out shooting, punching, and fighting with five great tales of action, adventure, intrigue, and all out Pulp, so much so that it’s packed into an EXTRA SIZED ISSUE!
Featuring three winners of the 2012 Pro Se sponsored White County Arkansas Writers Competition, Pro Se Presents 18 opens up with Six Guns, Desperadoes, and men willing to die for what’s right in tales written by Jim Barton, Gary R Hoffman, and Del Garrett!
This two fisted action packed issue also includes the debut story of author Jaime Ramos! And the first adventure of a pair of new characters destined to be a force in New Pulp- STONE KOLDE by Alyssa Swift and Tommy Hancock- premieres in PRO SE PRESENTS 18! Featuring a stunning cover by Marc Guerrero and Format and Design by Sean Ali, get all the Pulp You can handle in the latest issue of PRO SE PRESENTS!
Available for Kindle at http://tinyurl.com/btzyzfrand for the Nook at http://tinyurl.com/d33egx6! Also available in multiple formats from Smashwords at http://www.smashwords.com/books/view/298420! And only for $1.99!
Share