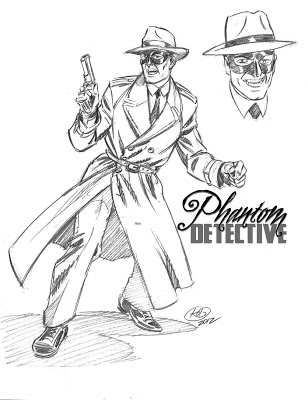 “One of those projects now in the works will be our very first PHANTOM DETECTIVE anthology,” Fortier explained on his website in his weekly Flight Log Blog where he shared Rob Davis’ sketch sketch of the character (also pictured above). “If the name sounds familiar,” Fortier continued, “it is because he truly was one of the more popular classic pulp heroes with his own monthly magazine. The thing about him that most people recall is how they would portray him on the covers in a silk top hat and tuxedo. Pretty silly when one thinks about it and the truth is he never ever appeared in that ridiculous outfit in the actual stories in the mag. Rather he wore top coat and fedora with a domino mask just as Rob has drawn him here. We are excited about doing this fan favorite and have assembled what we consider the cream-of-the-crop amongst today’s New Pulp writers to bring you his new adventures.”