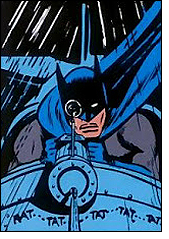 Why doesn’t Batman use a gun?

Because his parents were shot down? Really? I mean… really?

That’s weak. Even for an obsessive-compulsive who’s borderline psychotic, that’s just silly. He’s got a belt full of lethal weapons, he’s got more in his car, and even more in his cave. And, speaking of OCD, they all have the same first name.

So, why doesn’t Batman use a gun?

Because it’s boring. It’s visually boring, and comics is a visual storytelling medium.

If the Joker comes running at him, he can whip out his Batgun and splatter the walls with green hair. Or he can start off a nifty three-page fight sequence.

Well, he can also whip out his Batarang and separate the crown from the clown, but that’s just one long panel. It might be entertaining if we were in one of those once-every-generation 3-D fads, but those fads never last long.

The Red Skull is out after Captain America. Cap whips around and:

A)  Shoots him, obviously in self-defense and likely saving the lives of dozens if not hundreds of innocents to come, or

B)   Frisbees his mighty shield across the page and leaps upon the evil bastard and pummels the poo out of the guy, who even in defeat, manages to escape.

Yeah. What would Jack Kirby do?

Superheroes are not anti-gun because they are possessed by the liberal media. Superheroes don’t use guns because it’s unexciting storytelling. Gunplay in superhero comics is visually boring.

Police use guns because they are not paid by the panel and they have some concern over what their spouses are making for dinner. Taking the longer view, our military uses guns for much the same reason. In their world, visual excitement will likely get them killed.

You know who else uses guns?

Gun nuts. But that’s only in the real world.