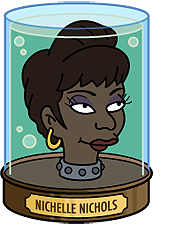 Patiently standing in the checkout line at Stop & Shop today (which was mobbed because tomorrow is the first night of Passover) I did what so many of us do – browsed the covers of the tabloids. Kim Kardashian has gained more than 40 pounds during her pregnancy. And here I didn’t even know she was enceinte! Kate Middleton, who is also pregnant, fell while attending a royal function because her heel got stuck in a grating! (Oh, no!) Jennifer Aniston reveals her wedding dress! (Somehow I doubt that.)

And then my eyes fell on a special Star magazine edition called Star Trek Collector’s Edition: Into Darkness Special.

It features such things as “100 Greatest Star Trek Moments” (which were strangely not listed in order) and “The Women Who Rule Outer Space” with pictures of Jeri Ryan as Seven of Nine and Jolene Blalock as T’Pol on the cover (but no Katherine Mulgrew as Captain Katherine Janeway inside?..

Which gave me the idea to list some of my favorite and most hated Star Trek what-nots. So, in no particular order:

Best cliffhanger – ST TNG, Best of Both Worlds, Part 1. “Mr. Worf – Fire!” Everybody hold your breath for a week.

Best episode – ST TOS, The City on the Edge of Forever. Edith Keeler dies as she is supposed to. The universe wins. The Nazis lose. So does Jim Kirk.

Best line – ST TOS, The City on the Edge of Forever. “Let’s get the hell out of here.” No histrionics from Bill Shatner. Perfect delivery.

Best Chief Medical Officer – ST TOS. Leonard H. McCoy, M.D. The good doctor also makes an appearance in the pilot episode of The Next Generation, in which he irascibly tells Data that he sounds like a Vulcan, even though “I don’t see any pointed ears on you, boy.”

Sexiest Character Female. – ST TOS. Yeah, I know, if you’re of the opposite sex – from mine – you’re going to say Jeri Ryan, she of the silver catsuit. Me, I’m going with Nichelle Nichols.

Best Lt. Saavik – Kirstie Alley. Did Sam Malone know that Rebecca was a

Best Episode – ST TOS, The City on the Edge of Forever. With apologies to Harlan Ellison, I think the aired episode is better than his original teleplay.

Best Episode – ST DS9, In the Pale Moonlight. Sisko and Garak maneuver the Romulans into war. Like Bush and Cheney maneuvered us into Iraq. Sisko suffers a moral crisis over his decision. Garak doesn’t. Neither do Bush and Cheney.

Best Episode, – ST Voyager – One Small Step. “The Yankees, in six,” Seven of Nine whispers to the dead to astronaut.