THE NEW ADVENTURES OF SENORITA SCORPION DEBUTS FROM PULP OBSCURA! 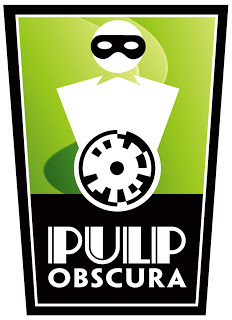 A fearless Avenger for Justice atop a blazing steed!  The explosive blast of six-guns filling the air, punctuated by the sharp crack of a whip!  A mask protecting the identity of someone fighting for Right in the Old West!  All the elements to make a fantastic Pulp story came together decades ago in tales crafted by a prolific Pulp Writer.  Now PULP OBSCURA, an imprint of Pro Se Productions in conjunction with Altus Press, proudly presents three new tales of this groundbreaking character from Pulp’s Golden Era!
Pulp Obscura’s THE NEW ADVENTURES OF SENORITA SCORPION, featuring Les Savage, Jr.’s Masked Mistress of the Range is now available, adding another stellar star to the lineup of classic, but often forgotten or underrated heroes now living again in Pro Se’s exciting imprint!

Created by Savage in 1944 for Action Stories, Senorita Scorpion is in fact Elgera Douglas, a young lady who became a legendary outlaw defending her family’s land and legacy, the fabled Lost Santiago Mine. Beautiful and deadly. A crack shot. A Fast thinking, daring fighter who is ruthless to those who threaten the land and people under her protection!
“Senorita Scorpion,” stated Tommy Hancock, Editor in Chief of Pro Se Productions, “is a wonderful character on several levels with so much potential.  Masked heroes in the Wild West have a special place in the heart of fansof all sorts, from Pulps to old time radio to television and beyond.  Senorita Scorpion fits right into the category.  Then add in the fact that not only is this a female lead character created at a time when that wasn’t done very often, but that she was written to be as strong and capable as the very men she stood against.   Les Savage, Jr. gave Pulp fiction a heroine that is just as relevant now as she was in the 1940s and we’re definitely glad to be a part of continuing her adventures!”
Nancy A. Hansen sends Senorita Scorpion into action to the ringing of THE BELLS OF ST. FERDINAND!   Andrea Judy demonstrates that some jail breaks simply need AWOMAN’S TOUCH! And Brad Mengel posts a fantastic bounty with WANTED: SENORITA SCORPION!  Three great writers bring a classic Pulp character galloping back to life in three daring tales of hard riding action and bold adventure!
From out of the Past comes New Tales of Classic Characters from PULP OBSCURA! With editing by Percival Constantine, an amazing cover by Mike Fyles and Format and Design by Sean Ali, ride alongside the mysterious blond bandit of the Old West in THE NEW ADVENTURES OF SENORITA SCORPION!  Available from Pro Se at https://www.createspace.com/4213804and from Amazon at http://www.amazon.com/The-New-Adventures-Senorita-Scorpion/dp/1483910415/ref=sr_1_1?ie=UTF8&qid=1363749317&sr=8-1&keywords=new+adventures+of+senorita+scorpion! Coming soon in Ebook format!
Also, get two volumes the original adventures of Senorita Scorpion by Les Savage, Jr. reprinted in exquisite collectible editions from Altus Press at http://www.altuspress.com/projects/the-complete-adventures-of-senorita-scorpion-volume-1/ and http://www.altuspress.com/projects/the-complete-adventures-of-senorita-scorpion-volume-2/!
If interested in review copies, interviews or further information, please email Morgan Minor, Pro Se’s Director of Corporate Operations at tommyhancockpulp@yahoo.com