Review: ‘The Last Days of Krypton’ by Kevin J. Anderson 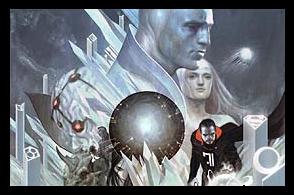 Everyone knows the basic story of [[[Superman]]]. Baby Kal-El, last survivor of the planet Krypton, rocketed to Earth by his parents Lara and Jor-El, found by a nice couple in Kansas, raised to be Clark Kent AKA Superman. But what about the story of Krypton before Kal’s birth? What about the lives of his biological parents?

In this hardcover novel published by Harper Entertainment, Kevin J. Anderson ([[[Captain Nemo]]], [[[Hopscotch]]], [[[Star Wars: Darksaber]]]) gives us a story of the ill-fated planet and its people, who are so tranquil and advanced in science that they have stopped dreaming and questioning reality. One man, Jor-El, still dares to dream — but finds his technology constantly censored by the Science Council and by Commissioner Zod. Eventually, Jor-El meets someone much like him, an artist named Lara Lor-Van who never hesitates to speak her mind, and the two fall in love. When disasters begin to occur, Jor-El and Zod may have to join forces to save their planet from destruction. But is Zod really concerned about the benefit of Krypton or is he plotting his own take-over?

In the foreword to this novel, comic writer Marv Wolfman (New Teen Titans

, The Crisis On Infinite Earths

) stated that Kevin J. Anderson’s goal was to create a story that took elements from all of the various and contradictory interpretations of the planet Krypton, its society and just why it was destroyed. (Did the sun go supernova, was it destroyed by a shifting orbit or was it a victim of a war involving terrible weapons?) The result would then be a tale that would allow everyone to at least find one or two familiar elements and would be entertaining for people who knew very little about the Superman mythos.

Unfortunately, that is not quite what we get. But more on that later. First, I should mention there are many good scenes here and there, as well as some touching moments. Of particular note is Anderson’s version of the first meeting between Jor-El and Lara Lor-Van. It involves danger and nice characterization and the date that it leads into shows just why these two fall for each other. Too often these days, we are shown a couple who are in love but who don’t really show this in their actions, requiring the writer/director to spell things out by having their characters awkwardly say things such as “I’m blinded by your love.” (Are you listening, George Lucas?!)

Anderson also does a very good job establishing complex relationships and that everyone is multifaceted. Zor-El admires and respects his brother Jor-El’s accomplishments but is also envious of his scientific brilliance, even admitting to himself he may have gotten into politics partly because it was a field that Jor-El had no real talent for. The evil Zod is shown to be a man of contradictions, callously killing anyone who is an obstacle in his way without hesitation or remorse and yet also showing a deeply protective and father-like attitude towards his ward, Nam-Ek.

But I have several issues with this book. While I’m glad Zod is a bit more three-dimensional, his villainous side in this book isn’t quite evil enough for me to rank him as a major threat. His political manipulations are fairly predictable and straightforward, so much so that I question the intelligence of the average Kryptonian. And half of his victories are dependent on lucky factors he could never have foreseen. This makes him appear to be more of an opportunist than a truly terrifying villain who will one day become a dangerous enemy to [[[Superman]]].

Rather than unifying various continuities, some of Anderson’s revisions seem detrimental. In the films starring Christopher Reeve, Zod was seen to be aided by a vicious woman named Ursa and a mute powerhouse named Non. These two also debuted in the mainstream Superman

comics last year. Anderson’s novel describes two characters who are obviously the same people but are instead called Aethyr and Nam-Ek respectively. Why change the names at all except to confuse folks?

Another flaw in the story is that Krypton doesn’t seem terribly interesting. We’re told about three cities and nothing else. We meet a few indigenous creatures. And we understand the tragedy of a society that has reached an evolutionary standstill. But it’s hard to feel sympathy for a world when we’re constantly being faced with how pathetically it’s run by petty politicians and a stubborn population. Why didn’t we hear more about people of great character such as Jor-El, Lara and Zor-El? Were they the only people on the planet who were worth a damn? And why not include some of the more visually striking elements from the comics? Elements such as Krypton’s “glass forest,” its great “fire-falls” of lava and other examples of the planet’s natural beauty could make this place seem like a strange wonderland of sorts, thus making us truly mourn its loss later.

One thing that comes off as faintly ridiculous is the destruction of Krypton itself. In the span of one book, a comet, a chaotic sun, devastating nuclear weapons and internal forces of the planet itself all show up as possible planet-killers. So when Jor-El later warns the Council that another great disaster approaches, it’s completely understandable when they don’t believe him.  What’s more, all of these events make it seem as if the universe really just doesn’t like Krypton, making any rescue attempt pointless because you have the feeling that two months later, yet another apocalyptic event will be sure to happen. When the planet does die in the end, I just find myself thinking “Well, it took long enough!”

Finally, there’s the feeling that this story doesn’t really stand on its own. I understand that, of course, this is a prequel to the life of Kal-El. Still, if readers were to pick this book off the shelves and weren’t fully aware of the Superman mythos, I imagine they would be confused by the large dangling plotlines. In the Superman comics, it’s well known that an evil alien artifical man called Brainiac came to Krypton before its death and literally stole the Kryptonian city of Kandor, imprisoning it and its inhabitants in a bottle for decades until Superman would finally rescue them.

But if you don’t know any of that, you may be scratching your head trying to figure out why this guy Brainiac shows up, seemingly at random, takes Kandor, and is never heard from again for the rest of the novel. And if you are familiar with Brainiac in the comics, this scene is even more annoying because the twisted, evil Brainiac doesn’t seem all that villainous here. He almost comes off as a well-meaning but misguided robot who is guided by a child-like naivete. If Zod and Brainiac are two of Superman’s biggest arch-enemies, why am I not afraid of either of them in this book?

So we have a story with some good ideas, nice scenes and some fun dialogue, but it still doesn’t “pop.” It neither agrees with any recent continuity nor does it stand on its own. The villains aren’t threatening, and after so many false alarms regarding Krypton’s destruction, when it actually does happen you may find yourself shrugging it off. I enjoy some of Kevin J. Anderson’s other work, but [[[The Last Days of Krypton]]] just felt rather lackluster.

Alan Kistler accidentally brought great destruction to the Bottle City of Kandor years ago when he confused it for a water cooler. He has been recognized by Warner Bros. Pictures as a comic book historian and can be seen on the Adventures of Aquaman and Justice League: New Frontier DVDs. He really wishes Marvel or DC or the kind folks at Doctor Who would realize he has some fun story ideas to share and write. His personal web-site is http://KistlerUniverse.com.