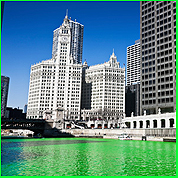 Today is Saint Patrick’s Day, a day to celebrate all things Irish, a day when real Irishmen and women hide in their homes while Amateur Irishmen take to the streets and the pubs. It’s a day when the city of Chicago – no lie – dyes the mouth of the Chicago River green… or even greener than usual. Given that this year Saint Paddy’s day occurs on a Sunday, I suspect that the celebration has been going on since at least Friday and may well last into next Thursday what with the whiskey and the beer and the general all around vomiting. Ah, glorious!

Since we’re celebrating things that are Irish, I’ll be mentioning some of me own favorite Irish films. You may have different ones and I’ll drink to those as well (it’s a day for it) but these are my particular favorites.

Classic. John Ford directed, John Wayne and Maureen O’Sullivan star, Victor McLaughlin, Ward Bond and Barry Fitzgerald co-star with a spectacular cast in this 1952 film about a retired American boxer who returns to the wee Irish village where he was born, finds love with a tempestuous redhead and a feud with her ill-tempered bully of a brother.

If there is one Irish themed film that most Americans know, I bet it would be this one. I love it, too, but there are things that bother me about it. First – I can’t really determine when it happens. Given what the characters say in the movie, I’m assuming it’s set before the establishment of the Republic of Ireland but I’ve never been sure. Secondly – there’s a casual and accepted treatment of women (“Here, sir – a stick with which to beat the lovely lady.”) that is a little hard to take. Lastly, the characters are all colorful but they’re stereotypes.

For all that, I love the film. John Wayne gives a fine performance and there are really romantic moments where he’s very tender. Barry Fitzgerald was never more of an Irish leprechaun than here and says one of my favorite lines; on looking at the wreckage of Wayne and O’Sullivan’s wedding bed the day following the wedding night, he murmurs, “Impetuous! Homeric!” Makes me laugh every time.

You get the feel that this is far more the real Ireland than with The Quiet Man. It also has an incredible score; the soundtrack of new versions of classic soul and R&B is itself now classic. Andrew Strong who plays the band’s lead singer, Deco Cuffe, could give Joe Cocker a run for his money. Funny, revealing, and you can dance to it. What more do you want from a movie?

This is a weird damn movie from the year 2000 filled with the very best of black Irish humor. I don’t think I can improve on IMDB’s pithy description: “A woman becomes furious when her husband arrives home from the local pub and turns into a rat.” It stars Imelda Staunton and Pete Postlethwaite and focuses on the family, none of whom seem all that surprised that the man of the house has turned into a rat. One of the taglines for the movie is “He might eat maggots and live in a cage but he’s still our Dad.”

Staunton, who some may recognize as Dolores Umbridge from some of the Harry Potter films, is simply superb. The Irish accents are a bit thick and may take some getting used to but there are moments of jaw dropping comedy in this. For all its surreal premise, this also seems to capture something very real in the Ireland in which its set. Not for everyone, I think, but I loved it.

Not only my favorite Irish film but one of my favorite films of all time – period. The 1998 film, written and directed by Kirk Jones, stars Ian Bannen, David Kelly, and Fionnula Flanagan and is set in the small town of Tullymore. Someone there has won the Lotto; Jackie O’Shea (Bannen) and Michael O’Sullivan (Kelly) are determined to find the winner before anyone else knows and help them spend their winnings. The winner, they discover, is Ned Devine of the title and the shock of learning he’s won has killed him. Jackie, after a dream – a “premonition” – decides that Ned’s spirit wants Jackie to claim the prize by pretending to be Ned so it doesn’t go to waste.

It doesn’t go quite as planned.

To be honest, after first seeing the trailer I wasn’t sure I wanted to see the film. For reasons I won’t try to explain here, there were glimpses of a naked David Kelly on a motorbike rushing around. Aged male backsides are not an inducement to me. However, My Mary really wanted to see it so we went.

There are some impeccably timed moments in the film and none greater than the climax. All I’ll tell you is that it is a very dark Irish joke and the first time I saw it in a movie theater, I literally nearly fell out of my seat, laughing hysterically. The row of seats we were in shook because I was laughing so hard. I tried to smother my laughter but people were turning to look at me. I couldn’t help myself. I have it on DVD and I laugh just as hard every time I see that climax. I know its coming, I know it by heart, and it shouldn’t affect me like that but it does.

Over repeated viewings I’ve become aware of story flaws and inconsistencies here and there but I just don’t care. I adore this film. It also has one the best movie soundtracks that I know and I play it often by itself.

So, this Saint Patrick’s day, you can go out and drink yourself into oblivion or until you see all the snakes St. Patrick drove out of Ireland but I’m going to stay in and watch one or all four of these films. Just be sure to get home safely so you can be around for St. Patrick’s Day next year and watch ‘em yourself.