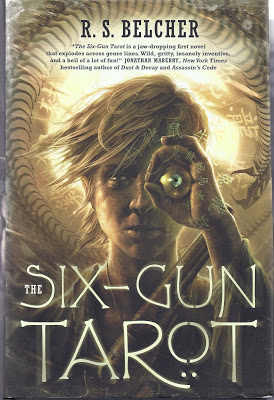 Were we about to pitch this book as a possible movie to a Hollywood studio, we would  present it as a super amalgamated cross between Stephen King’s “Salem’s Lot” and Lawrence Kasdan’s “Silverado.”
If you are an avid reader, then we no need to tell you that the new pulp genre known as the Weird Western is extremely popular these days.  From anthologies and novels, it is a fantasy theme that has captured the fancy of readers everywhere.   “The Six-Gun Tarot” is the best Weird Western book on the market today.
The setting is post-civil war in a Nevada mining town called Golgotha.  For reasons known only to a select few, it is the nexus of good and evil at the heart of the universe.  Locked up its mountains lies an ancient evil that existed before creation and here Belcher dives into Lovecraft territory head-on setting forth the book’s primary plot conflict.  The beast, known as the Black Wurm, is about to be released from captivity and if it succeeds it will destroy the world.
Thus is falls upon a handful of truly memorable characters to save creation.  These include Sheriff Jonathan Highfather, a man who cannot be killed; his deputy, a half-breed Indian coyote-changeling called Mutt, a young fifteen year old boy, Jim Negrey, on the run from the law who possesses a mysterious all-powerful eye said to contain unimaginable power and the beautiful but deadly Maude Stapleton, a Southern Belle secretly trained in ancient martial arts and occult practices.
That is only a sampling of some of the fantastical citizens of Golgotha that play an active part in this cataclysmic battle between light and dark, good and evil.  There’s also Auggie, the local shop merchant who keeps his dead wife alive in a vat of chemicals put together by the town’s eccentric inventor and Malachi Bick, the saloon owner who just may be a fallen angel sent to protect mankind at the beginning of time.
“The Six-Gun Tarot” is one of those rare books that kept surprising us from chapter to chapter.  Just when we thought it couldn’t get any weirder, it did just that until we became totally enraptured by Belcher’s daring and exuberant imagination.  It certainly has no bounds.  This is a book we recommend to all lovers of fantastic fiction and assure you once you’ve ridden into Golgotha, you won’t want to leave.
Share