Martha Thomases: We’re Back In The Sixties Again 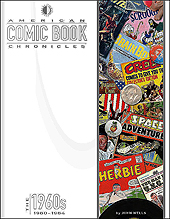 When Editor-in-Supremo Mike Gold asked me to review American Comic Book Chronicles: 1960-1964, I said, “It sounds like my childhood between two covers.” So he sent it to me.

First, the bad news. This isn’t a bunch of reprints from the early Sixties. I realize that would be a nightmare in terms of getting all the necessary permissions, but that’s what I wanted. The book is lots of cover shots and panels and ads for other comics, with text in the middle.

I didn’t read it all. I didn’t have time. So this isn’t really a review. I just read the parts about comics I liked, or might have liked if I’d known about them when I was seven.

Seven is, as we all know, the Golden Age of Comics.

I think the book tries to cover too much ground. They consider comics to include newspaper strips and humor magazines like Mad and Help. These are interesting subjects, but I think covering them dilutes the main story.

The book shows you the ways that the times influenced the comics, whether it was the Beatles, the election and then the assassination of President Kennedy, or the civil rights movement, sometimes all at the same time.

It’s also just about the time that the guard changed. Boys (almost always boys) who grew up reading comics were old enough to write, draw and edit them. They started fandom. They wrote long, thoughtful letters to the letter columns.

And their involvement caused the characters to evolve. I remember reading the story of Lex Luthor’s marriage, on the planet Lexor where he was a hero. It made me feel something for him, like he was a person with feelings. That was a new insight for pre-teen me.

The stories started to have higher page counts, sometimes running across more than one issue. Characters had deeper relationships with each other and, therefore, with the readers. And yet, comics were still disposable enough that publishers would take ridiculous chances, so that, for example, they gave the Batman line to an editor whose only experience was in science fiction.

This is my favorite quote, from Julius Schwartz commenting on fan reaction (which was almost entirely positive) to the New Look Batman of 1964. “There’ll always be the diehards who resist any change, and we can always count on the nostalgic type who fancies that nothing in comics published today can match the so-called Golden Era of Comics.”

I hope to read more of the text in the future. And I definitely look forward to the next book (which I assume will cover the next five years of the Sixties), when underground comics emerge, and LSD makes such an impact on the public consciousness that even people who didn’t take it acted all trippy.