Mike Gold: Commuters Are A Superstitious and Cowardly Lot 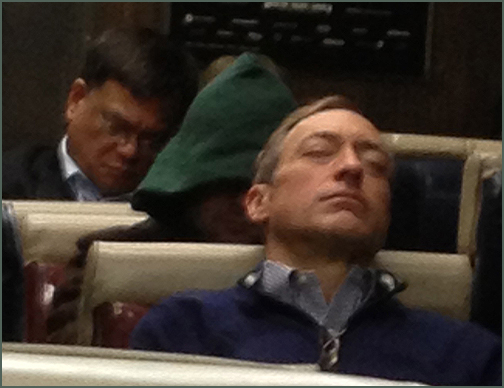 Last week I had the distinct honor and privilege of dining with my fellow ComicMix columnist Martha Thomases. Whereas I’d love to squawk on and on about the finest fried chicken I’ve ever eaten in Manhattan, it was after I left to go home when things got interesting, weird, surreal… and dangerous.

I got to my commuter train just in time to make the 9:07. I’d be home by 10:15. Not bad. We arrived on time in Harlem at 9:17 and proceeded up to the Bronx… where we came to a dead halt at approximately 178th Street and Park Avenue. After a few minutes we were told we were being delayed by a “police action.” OK; that’s life in the big city. I commenced to read the latest issue of Futurama Comics on my iPad. Then another announcement: oh, geez, they were mistaken. No police activity. The train broke down. It was a brand-new train, built by the Canadian company Bombardier. They set about to fix it.

Then the power went out. The emergency lighting was fine and my iPad had its own luminosity, but there was no air circulation and the temperature started to rise – quickly. People began to look at those emergency windows; you know, the ones that you can pop out in case the train is derailed and Bruce Campbell is walking around with a machete.

Some time later they said they power pads that draw the juice from the third rail had been ripped off, probably due to debris on the track. They’re working on it. Yeah, right. I started wondering if a texted last will and testament would hold up in court. Then they announced the train was, in fact, broken, and they were awaiting a diesel engine to tow us back to Harlem where, “hopefully,” there would soon be a train to which we could transfer.

The crowd started getting testy. Perhaps hypoglycemic shock is communicable.

Later still we were rammed by a coupling engine and it was announced all they had to do was hook up the air brakes and we’d be Harlem bound. A half hour later, they admitted they couldn’t get the brakes to work. Plan B: they’d find another train, bring it alongside mine, shut down the third rail and we’d bridge over to the new train. A few people who had been around that block said that would take at least an hour because they only open two doors for the bridge and everybody would have to walk through all the cars to get to the transfer point, then walk through the new train to find a seat. A few people started to freak.

Two ladies who evidently flunked out of their Connecticut finishing school started swearing profusely. Aside: why is it women are not very creative in their choice of curse words? “Fucking liars” is simply not sufficient. The situation called for something like “Jesus fuck a shit soufflé, these in-bread assholes couldn’t stack a pile of Ritz Crackers without a goddamned schematic.” Note to self: look into conducting training sessions for the malediction impaired.

Before long one of my comrades-in-boredom started screaming. Another started wailing. The lady sitting next to me kept on tossing her used Kleenex on the floor, along with her half-eaten food. I looked around to see if anybody had grown a Joker smile.

Eventually a train pulled alongside and maybe 15 minutes later the train bridge was in place and the third-rail was powered down. We made the long march to our new magic carpet ride. Of course, the new train was two cars shorter. The third rail was powered up and the air brake checks started.

And… they didn’t work.

And people went nuts. Remember the “preparing for crash landing” scene in Airplane?

I reconsidered my attitude towards zombies. Finally, after a platoon of train people manually pumped the air brakes into action (and yes, that looks as obscene as it sounds), we slowly moved forward. They apologized and said the next stop was Stamford. I said to myself “yeah, but will we be able to stop?” Then some guy made that very same statement out loud. Nobody laughed.

As we picked up speed, I noticed that one of my fellow travelers was Green Arrow.

No shit. Look carefully at the photo atop this column. This was not Photoshopped.

I got home just before 1 AM. One of our cats was waiting in the window, tapping his watch. Yes, he’s got a Mickey Mouse watch. You need a sense of humor to make it through the day in my house.

Of course, this was a fart in a blizzard next to the horrors of those riding that Carnival cruise ship, but my respect for my fellow Connecticuttians hit a new low, as my enthusiasm for the creators of Futurama Comics grew proportionately.