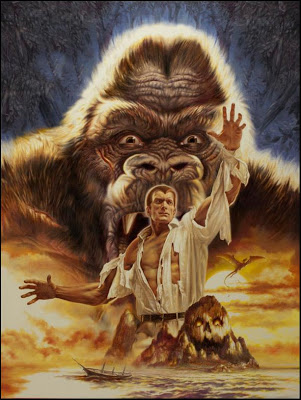 If you’re like me, you probably wondered what exactly we’d be getting in the new Doc Savage novel, SKULL ISLAND, it being both a Doc story featuring King Kong and a way to celebrate the 80th anniversaries of both legendary creations. Well, after reading the book, I’m happy to report that author Will Murray’s put some definite heart and soul into it and crafted what is now my most favorite of the recent “Wild Adventures of Doc Savage” series of novels.

But, that said, it’s different from just about any other Doc book you’ve ever read, something we’re clued in on by the “Will Murray” byline and the absence of the traditional “Kenneth Robeson” house name.

For me, the story was literally one that I didn’t want to put down; it’s that engaging. It begins at the end, right after Kong’s infamous nosedive off the Empire State Building, which leads directly to Doc’s involvement – or, rather, his telling of a tale to his aides of when he first met the giant simian. Yes, the great majority of the novel is a flashback to Doc Savage’s early days and therein is found its fascinating core. In essence, what we have here is the heretofore Secret Origin of Doc Savage.

Doc and his father – yes, you read that right; his father – head off on a quest for Doc’s grandfather, Stormalong Savage, which takes them into strange waters and exotic climes…and ultimately Skull Island. There they run afoul of enemies of many different stripes and discover wonders beyond their imagining. And a humongous ape-like “god-beast” called Kong.

Murray’s defining of the relationship here between Clark Senior and Clark Junior is practically worth the price of admission alone. This is a young Doc, fresh out of World War I and not exactly the bronze hero of the pulp adventures we know so well, and it’s with that admission that I can see some potential backlash with diehard Doc fans. This is a Doc who has not quite found his mission in life yet, nor honed all his skills and formed his famous tenets – most especially the rule against killing. This Doc kills and kills in often savage ways, which at points drenches the narrative in a bloodbath that may even disturb some readers. But, and it’s important to point this out, there’s a method behind Murray’s seeming madness – it all leads to something and something significant, namely the forging of the Doc Savage of the famous pulp adventures. And Murray does this all with style and careful thought and exciting imagery and action.

One of the things I loved about this novel is its use of language, precisely that which flies back and forth between elder and younger Savage in many bouts of witty verbal “fencing.” Will Murray has obviously crafted all his Doc books with care, but in SKULL ISLAND I believe I saw even more attention to detail, to dialogue, to atmosphere and to adventure. The story moves right along, only slightly bogging down a bit past its mid-section, and really defines the term “page turner.” Murray gives this one his best and finest and the book benefits from that in ways too numerous to list.

As I said before, this is a story of origins. Here we learn the origin of Doc’s trilling, of his disdain of guns and his inexhaustible search for knowledge, even the origin of the Hidalgo Trading Co. hanger. We also discover more information on the Savage family then we’ve ever had revealed to us before and hints of not only some of Doc’s other early adventures – did you know he was on the Titanic? – but also those of his father and grandfather, both famous explorers in their own right. Heck, we even hear about Doc’s uncle, another adventurer in the family. I wouldn’t be at all surprised if the author is suggesting here that readers might care to hear more of these adventures, as separate works.

But, again, it’s the relationship between father and son that really stands out in the novel, one that careens between dysfunctional and loving, and it’s that which will stay with me for some time to come. In fact, knowing the fate of Clark Savage Senior in 1933’s MAN OF BRONZE will perhaps add another layer of pathos to your reading of SKULL ISLAND.

And, oh yes, King Kong is here, too. You will discover much more about his origins, also, as well as Skull Island’s original inhabitants. And that’s all fascinating as well. Dinosaur fans will especially have reason to love this book. Kong and his environs are not given short shrift in the slightest; the King looms over this book with all the weight and gravity he deserves.

In all, I’m a richer pulp fan for having read SKULL ISLAND. Will Murray takes our expectations and delivers upon them while still striking off on his own path, assembling a story that will please both Savage and Kong aficionados and remind us all just how cool pulp can be. There’s heart and soul here, like I said, and I for one can’t quite see how Murray will manage to top this one….but I know he will, somehow.

Get this book and settle in for a trip to the South Seas and beyond, Savage style.