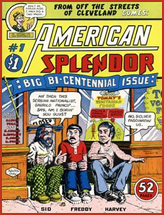 Great Caesar’s bust is on the shelf

And I don’t feel so well myself.

I guess they’re not kidding about this “dust thou art and unto dust shalt thou return” business. After 1,699 issues and 42 years of publication, what began as the brainchild of 17-year-old Alan Light and, after a few earlier names was finally and best known as The Comics Buyer’s Guide – CBG for short – has reached its end.

I don’t think I ever paid for an issue of the paper but, thanks to the generosity of its publishers, I read a lot of them. When I was sitting behind various editorial desks CBG would appear in the mail once a week and when I had some spare time I’d page through it, reading this and that. It wasn’t a big part of my professional life, but it was nice.

Eventually, I did a short article for it. My idea was to make CBG’s readership aware of Harvey Pekar and his self-published and strange and unique comic book, American Splendor. Since Harvey didn’t truck in the usual comic book stuff, I thought that maybe CBG’s readers might be missing something that was unlike anything else on the market, something they’d like. I now wish I had a do-over. Though my intentions were pure, the piece I produced, I think, was patronizing, maybe because I didn’t, and don’t, know how to describe Harvey’s episodic autobiographies. He was an American original and his work doesn’t classify easily.

That regrettable bit of quasi-journalism printed and, one hopes, quickly forgotten, I no doubt thought I was done with CBG except for my weekly reading of it. But the best was yet to come. CBG played a small, but crucial, part in events that shaped the rest of my life. Cue organ chord.

Getting married is generally considered to be a life-shaper, no? And getting married to a teenage sweetheart you haven’t seen in 30 years, well…

To be brief: Marifran Reuter, nee McFarland, was teaching a parish school of religion in a St. Louis suburb. Talking to a student’s mom, she mentioned that she once dated a guy whose brother had the same name as the student’s father. Mom and teacher compared facts and, yes, the student’s dad was, indeed,the brother of the guy teacher had dated, long since moved to New York and working as a writer. Teach wrote writer a letter and, on the writer’s next midwestern visit, they met and talked until three in the morning. A bit later, during a phone conversation, Marifran told the writer that she’d be selling text books in Omaha during summer vacation. Uh-huh! So the writer, me, looked into CBG and found the name of a comic shop in Omaha. I called the shop and persuaded the proprietor to invite me for an autographing session on the June day that Marifran was hawking textbooks in the area. Then I called her and said that she wouldn’t believe what just happened – I had a gig in Omaha on the same day and why don’t we meet in Missouri and go together…

Would it have happened without CBG? I don’t know. But happen it did, and on a warm Nebraska night, we sat on a hillside and spoke the truth as we knew it and created the rest of our lives.