REVIEW: The Nao of Brown 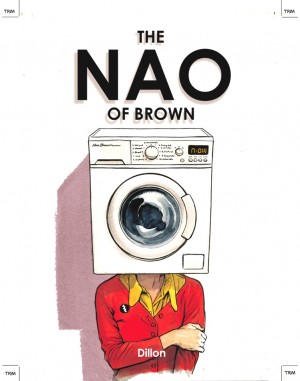 Somewhat lost amidst the affection showered on Chris Ware’s Building Stories was Glyn Dillon’s triumphant return to the comics form with the impressive Nao of Brown. Dillon began making a name for himself at Vertigo with a variety of works, notably the Egypt miniseries and then walked away to work in film. The tug of comics was strong enough to lure him back and commit nearly three years of his to producing this lengthy graphic novel.

Making his writing debut, he presents us with the story of Nao, a half-Japanese/half-English twentysomething who is yearning for a normal life and love but struggles daily with purely obsessional compulsive disorder, a secret she shares only with flatmate Tara. Her mind is filled with images of committing extremely violent acts and rates them on a scale from 1-10. As we open, she’s using Buddhist meditation to control her impulses and takes a job selling Japanese collectable toys at a small shop run by her friend, Steve, totally oblivious toward how he feels for her.

Instead, Nao is drawn to a large bear of man, Gregory, who repairs washing machines. Engineering a meeting, she damages the flat’s machine so he can come fix it. They begin to date, a tentative start at best given his own issues. He has some deep pain he masks with alcohol so we have two damaged souls looking for love and saving.

Throughout this beautifully illustrated work, Dillon presents a parallel story in Nao’s favorite Ichi style. While it features a protagonist named Pictor, who tries to rescue his family after being turned half into a tree by a being called the Nothing, it also has father figure Nobodaddy, who looks somewhat like Gregory. Here, Dillon shows his versatility, channeling the influence of Moebius and Miyazaki although the sequences don’t always work or really enhance the main story.

Tara, Steve, and the mothers to Nao and Gregory are fine, underdeveloped supporting characters. Contrasting the relations between the lovers and their mothers might have given this a little more substance but it’s nice to see positive familial relations and good friends in a story like this. 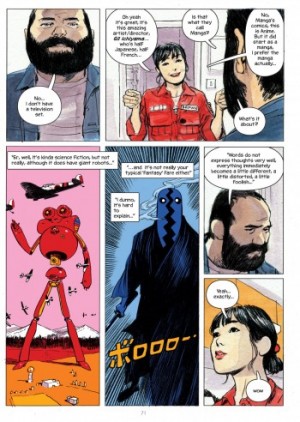 This is a slice of life style story as we meander from the shop to the flat to dates to Nao’s OCD and imaginary tale. We enjoy this because Dillon, younger brother to noted artist Steve Dillon, takes his time and makes us care about these characters. His naturalistic style emphasizes body language, setting, and mood through watercolor work that is a delight to look at.

He does not dwell at length on any of the themes raised in the story and this is far from a moral tale about OCD, despite the unique take on the mental disorder. He told The Comics Journal, “I was learning to meditate as well. In this meditation group there were other students saying how they couldn’t stop their minds from racing when they were trying to meditate, and there seemed to be parallels between that and OCD that all interested me at the time.” We get into Nao’s head and see what she gets out of meditation, what she sees in Gregory, and how she copes day in and day out. The coping and self-absorption, though, blinds her to other issues such as Steve’s infatuation or Greg’s personal demons, which eventually are thrown in her face.

As a tyro writer, though, he does not successfully build up to a strong climax, but let’s things happen and then we hurry through the crisis and then leap four years ahead for a too-tidy ending. A compelling character study, I find his overall message elusive. While entertained by the characters and enthralled by the art, the conclusion suddenly feels predictable, undercutting the rest of the book’s strengths.

Dillon’s return to comics is a most welcome one and if The Nao of Brown is an indication of what he’s interested in exploring, I‘ll be there to see what he uncovers.